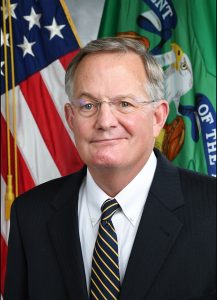 David J. Ryder is the 39th United States Mint Director. Mr. Ryder also led the Mint as its 34th Director from September 1992 to November 1993 during the administrations of President George H.W. Bush and President Bill Clinton.

Most recently, Ryder was the Global Business Development Manager and Managing Director of Currency for Honeywell’s Authentication Technologies group. Previously, Ryder served as CEO of Secure Products Corporation, a new business venture spin-off from the Sarnoff Corporation, who developed highly advance anti-counterfeiting technologies for the protection of global currencies and other valued document. The Honeywell Corporation acquired Secure Products in 2007.

As Mint Director, Ryder leads an organization of almost 1,700 people who are employed with responsibilities ranging from securing the assets entrusted to the Mint, to the design, manufacturing, and distribution of circulating, precious metal and collectible coins, and national medals. The Mint operates six facilities across the United States: Headquarters in Washington, DC; production facilities in Philadelphia, San Francisco, Denver, and West Point; and the U.S. Bullion Depository at Fort Knox.

Ryder was born in Billings, Montana and raised in Boise, Idaho. He attended Boise State University and is married with two children.

Learn about our former directors.