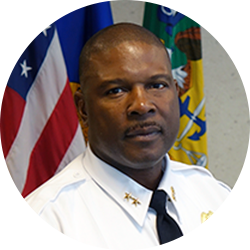 In 1991, he began his career as an entry-level police officer at the United States Mint in San Francisco, CA. He progressed through the ranks to Police Inspector. While assigned at the San Francisco Mint, he developed a local training program. The training methodology utilized was implemented nationally. In 2000, he was promoted to the rank of Field Chief, Washington DC, then to Deputy Chief, United States Mint Police in 2003.