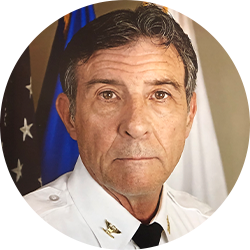 Chief Everetts completed a military career, retiring from the U.S. Marine Corps as a Master Gunnery Sergeant in August 1998. During his military service, he was stationed at numerous state-side locations, as well as completing ten years deployed overseas which included service during Operation Desert Shield/Desert Storm.