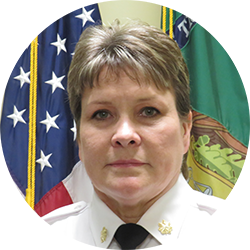 Adrienne Meyer currently serves as the inspector for the United States Mint Police at the U.S. Bullion Depository in Fort Knox, Kentucky. She began her career with the Depository in 1996 and has formerly served as a police officer, sergeant, and lieutenant. She also served as the facility’s emergency preparedness coordinator, law enforcement control tactics instructor, use of force instructor, evidence custodian, and quartermaster.

In addition to her Mint career, Inspector Meyer retired from the U.S. Army Reserves with over 22 years, having spent a combination of service on active duty, reserve duty, and combat deployment to Bagram, Afghanistan as an Army Criminal Investigations (CID) special agent. She was also part of the protective service detail for the Secretary of Defense, Secretary of the Army, Army Chief of Staff, and Vice Chief of Staff.