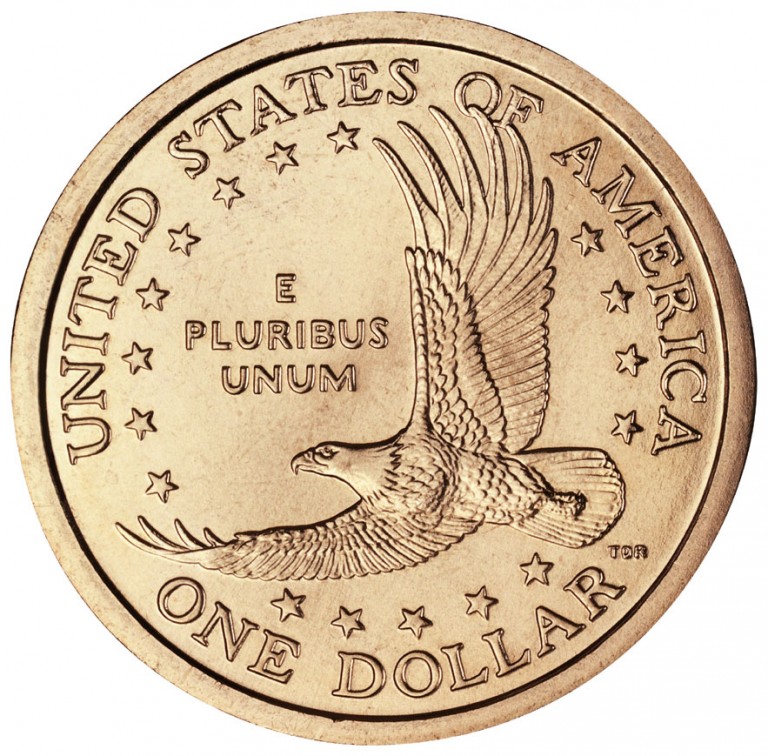 The U.S. Mint issued the Sacagawea Golden Dollar from 2000 to 2008. It was the first dollar made with an outer layer of manganese brass, giving it a golden color. The obverse design features Sacagawea and the reverse depicts a soaring eagle. In 2009, the dollar transitioned to the Native American $1 Coin Program using the Sacagawea obverse paired with different reverse designs each year.

The Life of Sacagawea

Sacagawea was the Shoshone Indian who assisted the historic Lewis and Clark expedition. From 1804-1806, while still a teenager, she guided the adventurers from the Northern Great Plains to the Pacific Ocean and back. Her husband and their son, who was born during the trip, also accompanied the group.

At about the age of 11, Sacagawea was captured by a Hidatsa raiding party and taken from her Shoshone tribe. She was later sold into slavery with the Missouri River Mandans. They then sold her (or gave her away in a bet) to Toussaint Charbonneau, a French-Canadian fur trader, who made her his wife.

Hired by Lewis and Clark

Charbonneau was hired by Captains Lewis and Clark primarily because of the skills his wife, Sacagawea, possessed. Sacagawea was only 15 years old at the time and already six months pregnant. Despite these possible limitations for such an arduous journey, she knew several Indian languages, and being Shoshone, could help Lewis and Clark make contact with her people and acquire horses that were crucial to the success of the mission.

Her contribution far exceeded anything Lewis and Clark had expected. She provided crucial knowledge of the topography of some of the most rugged country of North America and taught the explorers how to find edible roots and plants previously unknown to European-Americans. With her infant son bound to her back, she single-handedly rescued Captain Clark’s journals from the Missouri whitewater when their boat capsized. If she had not, much of the record of the first year of the expedition would have been lost to history.

Most crucially, however, Sacagawea and her infant served as a “white flag” of peace for the expedition. They entered potentially hostile territory well-armed but undermanned compared to the Native American tribes they met. Because no war party was ever accompanied by a woman and infant, the response of the Native Americans was curiosity, not aggression. They talked first, and Sacagawea often served as the translator. Not a single member of the party was lost to hostile action.

It is not surprising that after their trip ended, the adventurers felt a lifelong debt to Sacagawea. In fact, Clark wrote to Charbonneau that Sacagawea deserved a greater reward than what the expedition gave her. His sense of indebtedness to Sacagawea is reflected a few years later when Clark accepted responsibility for educating Sacagawea’s son and, after Sacagawea’s death at the age of 25, for a daughter as well. Sacagawea’s grave is in Lander, Wyoming.

The public played a unique and historic role in picking a design concept for the dollar. In June 1998, the Dollar Coin Design Advisory Committee (DCDAC) convened in Philadelphia to decide on a design concept in a public session. The committee included a member of Congress, a university president, the president of the American Numismatic Society, the under secretary of the Smithsonian Institute, a sculptor, and an architect. U.S. Mint Director Philip N. Diehl chaired the committee in a non-voting capacity.

The DCDAC listened to 17 design concept presentations from members of the public, as well as to numerous messages submitted by the public. The committee recommended that the dollar coin bear the image of Sacagawea.

The Public Reviews the Designs

The Mint invited 23 artists to submit designs with an image of Sacagawea for the obverse and complimentary reverse eagle designs reflecting peace and freedom. The Mint then invited representatives of the Native American community, numismatists, artists, educators, historians, members of Congress, Mint and Treasury employees, and other members of the public to review and comment on all designs received. In addition, historians advised the United States Mint on the historical merits of each finalist design.

Using these comments as a guide, the Mint narrowed the designs to seven and submitted them to the Commission of Fine Arts in December 1998.

The Commission of Fine Arts provided its recommendation to the Mint. After much review of all the input received to date, the Mint presented the final designs to the Secretary of the Treasury. On May 4, 1999, the Mint unveiled the selected design by sculptor Glenna Goodacre at the White House.

The Mint consulted with historians and Native American representatives on several aspects of the design. Historical records use conflicting spellings of Sacagawea’s name. Based on several highly regarded contemporary works, the Mint decided to use the “Sacagawea” spelling. The issue of how Sacagawea would have carried her baby is also one that the Mint spent a great deal of time examining. Consultants concluded that it is reasonable to assume that at some point on her journey, Sacagawea carried her son on her back in Hidatsa custom instead of a Shoshone cradleboard.

The Golden Dollar's obverse, or heads, has Sacagawea portrayed in three-quarter profile. In a departure from numismatic tradition, she looks straight at the holder. Glenna Goodacre, the artist of the obverse, included the large, dark eyes attributed to Sacagawea in Shoshone legends. Goodacre used a present-day Shoshone college student, Randy'L He-dow Teton, as her model.

On her back, Sacagawea carries Jean Baptiste, her infant son. Six months pregnant when she joined the Lewis and Clark expedition, Sacagawea gave birth to Jean Baptiste early in the journey.

Designed to complement the obverse, the selected reverse features a soaring eagle encircled by 17 stars. The 17 stars represent each state in the Union at the time of the 1804 Lewis and Clark expedition.

The coin's physical makeup is a three-layer clad construction - pure copper sandwiched between outer layers of manganese brass. Like any brass, its color eventually becomes darker, giving the coins an antique finish. If the coins are handled frequently, the darker "patina" may wear off the high points, leaving brighter highlights that give depth to Sacagawea against the darker background.