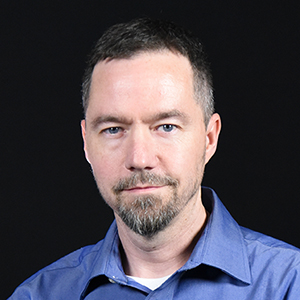 “The Artistic Infusion Program provides the challenge of designing for a very small canvas, boiling a topic down to its essence.”

Allen Douglas earned a Bachelor of Fine Arts in Illustration from Syracuse University. Throughout his career he has created illustrations for many notable book publishing, editorial, and gaming clients including St. Martin’s Press, Penguin Putnam, Tor Books, Berkley Books, Random House, Scholastic, HarperCollins, Harcourt, Little Brown, Macmillan/McGraw-Hill, Disney Hyperion, Wizards of the Coast, Hasbro, Upper Deck, Weekly Reader, The Village Voice, and Realms of Fantasy. He has created work for such properties as Star Wars, Lord of the Rings, Game of Thrones, and Dungeons & Dragons.

Allen’s independent artwork, all executed traditionally with acrylics and oils, depicts animals in both familiar and unexpected ways. He often turns to folklore for the concepts of his work and distorts size relationships, environments, or animals themselves to create visions that are truly unique, while at the same time paying homage to animals’ natural physical attributes and behaviors.

His paintings have been exhibited in galleries and museums both in the United States and internationally, including Haven Gallery, Gallery Nucleus, the Mazza Museum of International Art from Picture Books, the Society of Illustrators in New York and Los Angeles, and the Strong National Museum of Play. His artwork has been recognized by many prominent juried competitions including Spectrum: The Best in Contemporary Fantastic Art, the Society of Illustrators of New York and Los Angeles, Art Renewal Center’s Salon, Infected By Art, Ballistic Publishing, and Step-By-Step Graphics.

Allen currently teaches at the Rochester Institute of Technology. His studio is located in Rochester, NY on the southern shores of Lake Ontario.