Circulation of the Mexican Silver Dollar 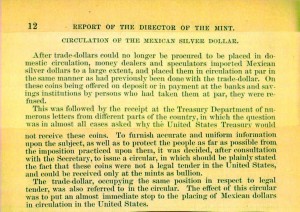 After trade-dollars could no longer be procured to be placed in domestic circulation, money dealers and speculators imported Mexican silver dollars to a large extent, and placed them in circulation at par in the same manner as had previously been done with the trade-dollar. On these coins being offered on deposit or in payment at the banks and savings institutions by persons who had taken them at par, they were refused.

This was followed by the receipt at the Treasury Department of numerous letters from different parts of the country, in which the question was in almost all cases asked why the United States Treasury would not receive these coins. To furnish accurate and uniform information upon the subject, as well as to protect the people as far as possible from the imposition practiced upon them, it was decided, after consultation with the Secretary, to issue a circular, in which should be plainly stated the fact that these coins were not a legal tender in the United States, and could be received only at the mints as bullion.

The trade-dollar, occupying the same position in respect to legal tender, was also referred to in the circular. The effect of this circular was to put an almost immediate stop to the placing of Mexican dollars in circulation in the United States.