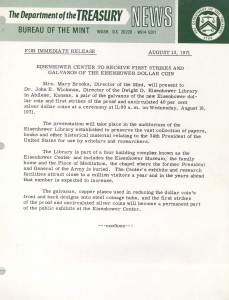 The presentation will take place in the auditorium of the Eisenhower Library established to preserve the vast collection of papers, books and other historical material relating to the 34th President of the United States for use by scholars and researchers.

The Library is part of a four building complex known as the Eisenhower Center and includes the Eisenhower Museum, the family home and the Place of Meditation, the chapel where the former President and General of the Army is buried. The Center’s exhibits and research facilities attract close to a million visitors a year and in the years ahead that number is expected to increase.

The galvanos, copper plates used in reducing the dollar coin’s front and back designs onto steel coinage hubs, and the first strikes of the proof and uncirculated silver coins will become a permanent part of the public exhibits at the Eisenhower Center.