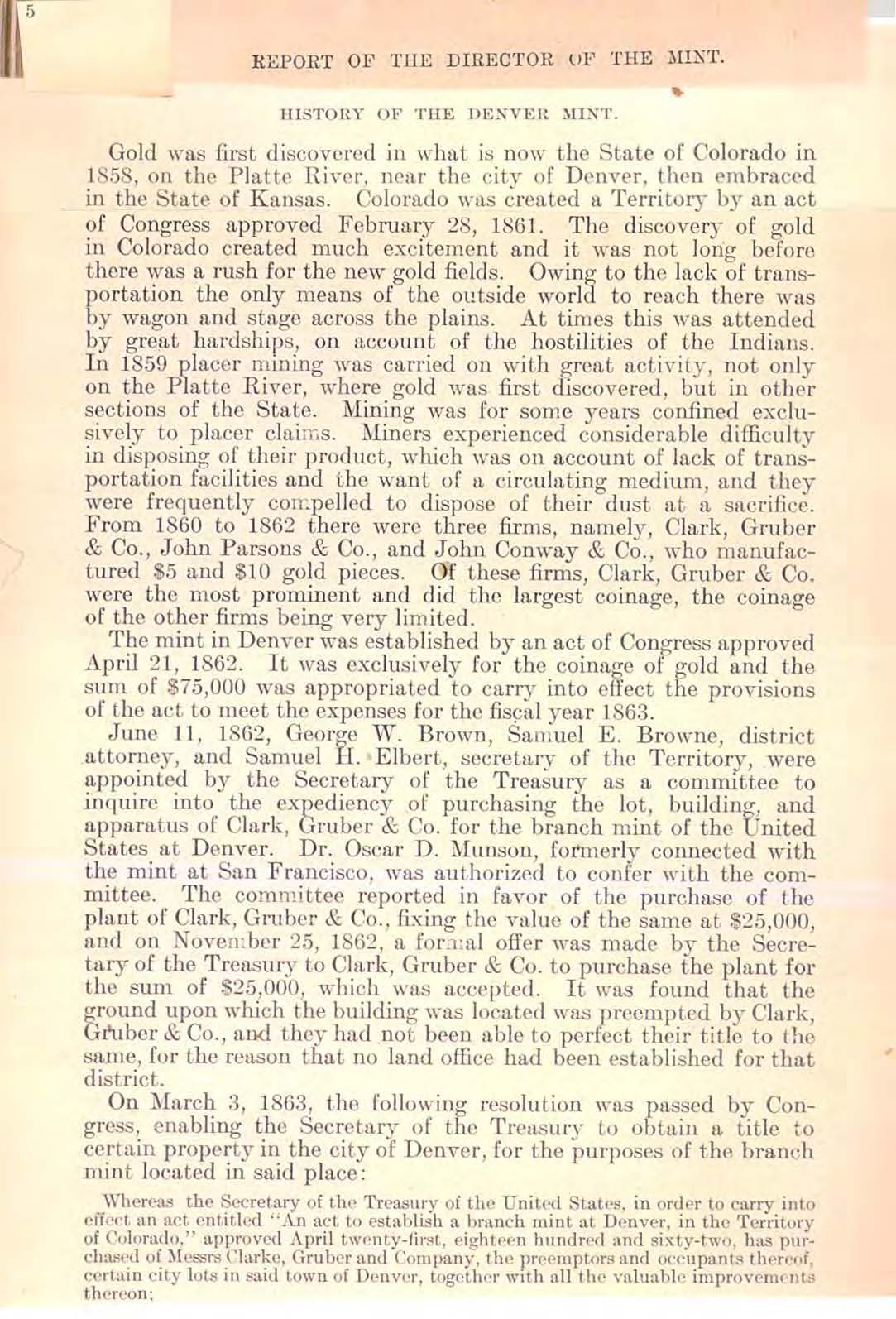 Gold was first discovered in what is now the State of Colorado in 1858, on the Platte River, near the city of Denver, then embraced in the State of Kansas. Colorado was created a Territory by an act of Congress approved February 28, 1861. The discovery of gold in Colorado created much excitement and it was not long before there was a rush for the new gold fields. Owing to the lack of transportation the only means of the outside world to reach there was by wagon and stage across the plains. At times this was attended by great hardships, on account of hostilities of the Indians. In 1859 placer mining was carried on with great activity, not only on the Platte River, where gold was first discovered, but in other sections of the State. Mining was for some years confined exclusively to placer claims. Miners experienced considerable difficulty in disposing of their product, which was on account of lack of transportation facilities and the want of a circulating medium, and they were frequently compelled to dispose of their dust at a sacrifice. From 1860 to 1862 there were three firms, namely, Clark, Gruber & Co., John Parsons & Co., and John Conway & Co., who manufactured $5 and $10 gold pieces. Of these firms, Clark, Gruber & Co. were the most prominent and did the largest coinage, the coinage of the other firms being very limited.

The mint in Denver was established by an act of Congress approved April 21, 1862. It was exclusively for the coinage of gold and the sum of $75,000 was appropriated to carry into effect the provisions of the act to meet the expenses for the fiscal year 1863.

June 11, 1862, George W. Brown, Samuel E. Browne, district attorney, and Samuel H. Elbert, secretary of the Territory, were appointed by the Secretary of the Treasury as a committee to inquire into the expediency of purchasing the lot, building, and apparatus of Clark, Gruber & Co. for the branch mint of the United States at Denver. Dr. Oscar D. Munson, formerly connected with the mint at San Francisco, was authorized to confer with the committee. The committee reported in favor of the purchase of the plant of Clark, Gruber & Co., fixing the value of the same at $25,000, and on November 25, 1862, a formal offer was made by the Secretary of the Treasury to Clark, Gruber & Co. to purchase the plant for the sum of $25,000, which was accepted. It was found that the ground upon which the building was located was preempted by Clark, Gruber & Co., and they had not been able to perfect their title to the same, for the reason that no land office had been established for that district.

On March 3, 1863, the following resolution was passed by Congress, enabling the Secretary of the Treasury to obtain a title to certain property in the city of Denver, for the purposes of the branch mint located in said place:

Whereas the Secretary of the Treasury of the United States, in order to carry into effect an act entitled “An act to establish a branch mint at Denver, in the Territory of Colorado,” approved April twenty-first, eighteen hundred and sixty-two, has purchased of Messrs Clarke, Gruber and Company, the preemptors and occupants thereof, certain city lots in said town of Denver, together with all the valuable improvements thereon;

And whereas the said Clarke, Gruber and Company have not, and can not at an early day, perfect their title to said lots by entry of the same at the district land office, for the sole reason that no such office is yet established in said district;

And whereas it is highly important for the interest of the Government to obtain at an early date the use and possession of said property to establish and open said mint: Therefore,

Resolved by the Senate and House of Representatives of the United States of America in Congress assembled, That the Secretary of the Treasury be, and he is hereby, authorized to receive and accept from said Clarke, Gruber and Company such relinquishments and conveyances of their right or claim to said lots and property as he, the said Secretary, shall deem sufficient for the extinguishment of any claim, right, or title which the said Clarke, Gruber and Company may or can have thereto. And said lots and property shall thereafter be reserved from public sale, preemption, or homestead settlement, and shall remain the property of the United States.

Title was finally obtained to the property in April, 1863, and immediate steps were taken to equip the building, but the time required to prepare the building, and to have machinery, apparatus, etc., constructed in the East, transported to so distant a point, prevented the opening of the institution until the latter part of September, 1863.

The operations of the mint were confined to the melting, refining, assaying, and stamping of the bullion, and the return of the same to the depositors in unparted bars, stamped with the weight and fineness. A superintendent, assayer, and coiner were appointed in November, 1862, and a melter and refiner in December, 1862. The institution continued on this basis until 1869, when Congress, on the approval of the Secretary of the Treasury, provided that it should be conducted as an assay office, with an assayer in charge and a melter, the amount of bullion deposited not justifying its continuance as a branch mint with a full corps of officers. Operations were confined to the melting and assaying of bullion and its return to the depositors.

An act was passed February 20, 1895, providing for the establishment of a mint at Denver, Colo., for the coinage of gold and silver.

The bill making appropriations for legislative, executive, and judicial expenses of the Government for the fiscal year 1896, approved March 2, 1895, made provision for the purpose of a site and the commencement of a mint building at Denver, at a cost of $100,000, and authorized the Secretary of the Treasury to contract for the completing of a building at a cost, including site, heating, ventilating, fireproof vaults, etc., not exceeding $500,000. On April 22, 1896, a site was purchased at a cost of $60,261.71. The original appropriation for the construction of the building was not sufficient, and this was increased by additional appropriations to $800,228.01. This amount has been further increased by providing that the amount received for the sale of the old mint building, authorized by act of June 30, 1906, shall be applied to the finishing of the new building. The new building was occupied in 1904, but the coinage operations were not commenced until February, 1906.

The amount appropriated for the equipment for the new building with machinery was $345,055, of which amount $327,258.50 have been expended.

A view of the structure is shown in the frontispiece, and a detailed description of the equipment, which is believed to be of the most approved designs for all the operations of coinage, will be found elsewhere in the report.