Skip navigation
You are here: Home / Library / 1976 Bicentennial Coins
Did You Know?
Groove-y edges made them harder to copy....

1976 was the 200th anniversary of American independence. To help celebrate the event, the backs of three circulating coins were given a special design. This was the first time in American history that any circulating coin came out with new designs for a special occasion that were made for only a short period of time. In this case, these designs were made in 1975 and 1976, though none shows a 1975 date; all say “1776–1976.” These unique coins are shown and described below.

In 1976, the quarter dollar had already used a portrait of George Washington on the front since 1932, the 200th anniversary of Washington’s birth.

The new bicentennial design on the back was made up of a colonial drummer and a victory torch surrounded by thirteen stars. 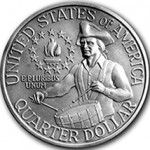 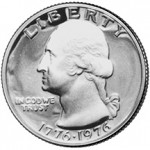 President John F. Kennedy first appeared on the half dollar in 1964, the year after his assassination.

The bicentennial design on the back features Independence Hall in Philadelphia, which was the state house of Pennsylvania at the time the Declaration of Independence was signed there.

The one-dollar coin of 1976 kept the portrait of Dwight D. Eisenhower on the front that first appeared there in 1971.

On the back, an image of the Liberty Bell and the moon suggest a link between the past and the future. (The first American astronauts had landed on the moon in 1969.) 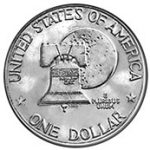 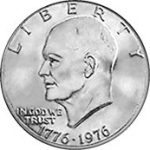 Check out the Bicentennial quarter lesson plans created as part of the 50 State Quarters Program (“lesson 6” for each grade group).