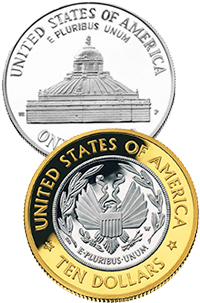 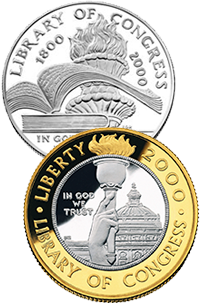 Silver: Features an architectural rendering of the dome on the Library of Congress' Jefferson building.

Bi-metallic: Features the hand of Minerva, Roman goddess of wisdom, holding the Torch of Learning with the Jefferson building dome in the background.

Silver: Shows the Torch of Learning and an open book.

“America’s Library” celebrates its 200th anniversary in the year 2000. What better way to mark a bicentennial than with two coins? Well … how about making one of them bimetallic?! To honor the Library of Congress, the Mint created two commmemoratives — a silver dollar and a ten-dollar gold-and-platinum coin, the nation’s first bi-metallic coin.

What began as a library just for Congress has grown into a rich resource for everyone. Today, the Library of Congress has 119 million books, sound recordings, films, photographs, maps, and musical scores, making it the world’s largest library. Every year, millions of people use the library’s 21 reading rooms or visit its American Memory website.