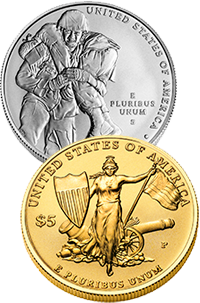 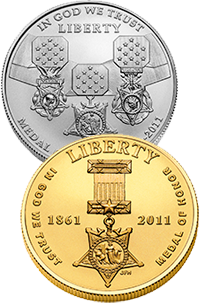 Gold: The design is based on the image that both the Navy and Army Medals of Honor originally used. The goddess Minerva stands with a shield representing the Army and Navy in her right hand and the Union flag in her left hand. Behind her, there is artillery used during the Civil War era.

Silver: Shows a modern infantry soldier carrying a wounded fellow soldier to safety under enemy fire. This image reflects the courage and self-sacrifice that those who receive the medal show in combat.

Gold: Depicts the original Navy Medal of Honor of 1861.

Silver: Depicts the three current Army, Navy, and Air Force Medals of Honor, left to right. The ribbon with a field of 13 stars is the common feature of all three medals, reflecting the joint nature of modern warfare. The Medal of Honor is the only U.S. military medal worn around the neck.

Congress can award the Medal of Honor to a person who risks his or her life above and beyond the call of duty. This can happen while fighting an enemy of the United States, while taking part in military operations against a foreign force, or while helping a friendly foreign force fight its enemy even though the United States is not part of the conflict.

The medals are presented by the President in the name of Congress. Fewer than 3,500 Medals of Honor have ever been awarded.