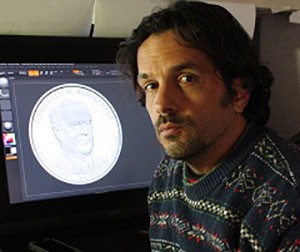 Joe Menna joined the roster of United States Mint artists as a medallic sculptor in 2005 following 18 years of professional experience and classical art training. Joe was the first full-time digitally-skilled artist hired by the Mint and his skills in traditional and digital sculpture have helped make the United States Mint a world leader in digital coin design and production. The 2013 Mount Rushmore National Memorial Quarter (shown below) that Joe designed recently won a Coin of the Year Award, an awards program sponsored by Krause Publications, in the category of Best Circulating Coin.

In addition to his work at the United States Mint, Joe maintains an active freelance career and is recognized as one of the world’s leading practitioners of digital sculpture.

Here’s how Joe describes his eight years at the Mint: “I was lucky to be the first digital artist at the Mint and so have had the opportunity to introduce a lot of new techniques and technology to how we make coins. It has been an honor and a privilege, and I only see us continuing to grow in that direction as we move forward in our mission.”

We asked Joe about his own favorite coin and medal designs and what he does when he isn’t working.

Question: Which of your coin or medal designs is your favorite?
Joe: My all-time favorite design and sculpt is the obverse of the Flight 93 Heroes of 9/11 Congressional Gold Medal (shown below).

Question: What are your interests outside your job at the Mint?
Joe: My main interest outside the Mint is my family. My wife is also an artist and we have three amazing kids. They are my heart and soul. 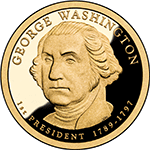