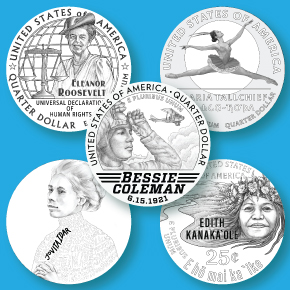 WASHINGTON – The United States Mint (Mint) is pleased to announce the designs for the second year of the American Women Quarters™ Program. Authorized by Public Law 116-330, this four-year program features coins with reverse (tails) designs emblematic of the accomplishments and contributions of trailblazing American women. Beginning in 2022 and continuing through 2025, the Mint is issuing five quarters in each of these years. The ethnically, racially, and geographically diverse group of individuals honored through this program reflects a wide range of accomplishments and fields, including suffrage, civil rights, abolition, government, humanities, science, space, and the arts. The 2023 coins recognize the achievements of Bessie Coleman, Jovita Idar, Edith Kanakaʻole, Eleanor Roosevelt, and Maria Tallchief.

“I am pleased to announce the designs of the 2023 American Women Quarters,” said Mint Director Ventris C. Gibson. “These beautiful designs honor the achievements of these amazing women and add to the Mint’s rich history of rendering the history of our Nation in enduring examples of numismatic art.”

The Secretary of the Treasury selected the final designs in accordance with the design selection process, which is available here.

Depicts Bessie Coleman as she suits up in preparation for flight, her expression reflective of her determination to take to the skies, the only place she experienced a freedom she did not have on the ground. The inscriptions are “UNITED STATES OF AMERICA,” “QUARTER DOLLAR,” “E PLURIBUS UNUM,” “BESSIE COLEMAN,” and “6.15.1921,” the date Coleman received her pilot’s license.

Depicts a portrait of Jovita Idar with her hands clasped. Within her body are inscriptions representing some of her greatest accomplishments and the newspapers for which she wrote. The text includes the inscriptions “MEXICAN AMERICAN RIGHTS,” “TEACHER,” “JOVITA IDAR,” “NURSE,” “EVOLUCIÓN,” “ASTREA,” “EL HERALDO CRISTIANO,” “LA CRUZ BLANCA,” “JOURNALIST,” “LA CRÓNICA,” “EL PROGRESO,” and “LA LIGA FEMENIL MEXICANISTA,” as well as “QUARTER DOLLAR,” “E PLURIBUS UNUM,” and “UNITED STATES OF AMERICA.”

Depicts a portrait of Edith Kanakaʻole, with her hair and lei poʻo (head lei) morphing into the elements of a Hawaiian landscape, symbolizing Kanakaʻole’s life’s work of preserving the natural land and traditional Hawaiian culture. The inscription “E hō mai ka ʻike” translates as “granting the wisdom,” and is a reference to the intertwined role hula and chants play in this preservation. Additional inscriptions are “UNITED STATES OF AMERICA,” “E PLURIBUS UNUM,” “25¢,” and “EDITH KANAKAʻOLE.”

Depicts a portrait of Eleanor Roosevelt and the scales of justice against a backdrop representing the globe, symbolic of her impactful work with the Universal Declaration of Human Rights. Inscriptions are “UNITED STATES of AMERICA,” “QUARTER DOLLAR,” “E PLURIBUS UNUM,” “ELEANOR ROOSEVELT,” and “UNIVERSAL DECLARATION OF HUMAN RIGHTS.”

The common obverse design of all coins in the American Women Quarters Program is by Laura Gardin Fraser, one of the most prolific female sculptors of the early 20th century, whose works span the art and numismatic worlds. Fraser’s design depicts a portrait of George Washington, which she originally composed and sculpted as a candidate to mark George Washington’s 200th birthday. Though recommended for the 1932 quarter, then-Treasury Secretary Mellon ultimately selected the familiar John Flanagan design. Inscriptions are “LIBERTY,” “IN GOD WE TRUST,” and “2023.”

On-sale dates for products containing 2023 American Women Quarters will be published on the Mint’s Product Schedule here. In the meantime, we invite you to shop 2022 AWQ products or enroll in the program today. Limited quantities will be produced, so sign up to ensure you receive the latest product in the series.