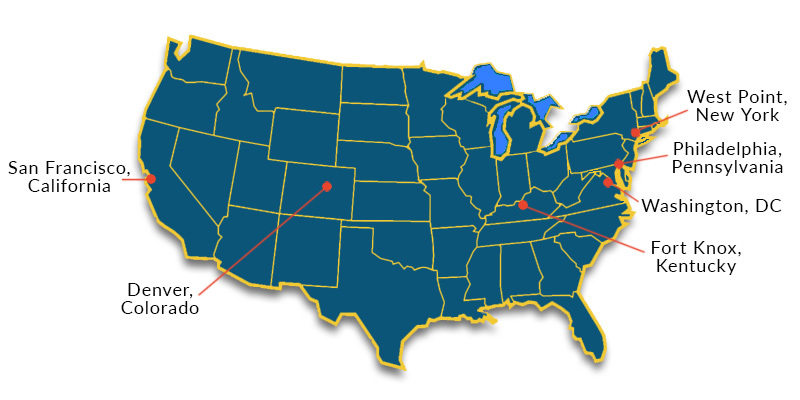 To learn about a facility, click on a city:

What Is the United States Mint?

Where is the Mint? There are six places around the country that make up this federal agency. Each one is called a “facility.”

What Is a Facility?

A facility is a place or building set up for certain reasons. As a house has a kitchen for cooking and a bedroom for sleeping but the rooms are still part of one house, so the United States Mint has six facilities with different purposes.

From the headquarters in Washington, DC, the Director of the Mint oversees facilities in Philadelphia, PA; Denver, CO; San Francisco, CA; West Point, NY; and the U.S. Bullion Depository at Fort Knox, KY (shown on the map above).

If you’re near Philadelphia or Denver, take a tour of the Mint to watch the coin-making process. Get more information on the U.S. Mint website. Or, take a virtual tour!

The headquarters of the Mint is in Washington, DC. Though this facility does not make coins, it is responsible for coin laws, research, marketing, and other important business related to the Mint’s operations.

Once you’ve explored here, you can also learn about the history of the Mint through the historical timeline.