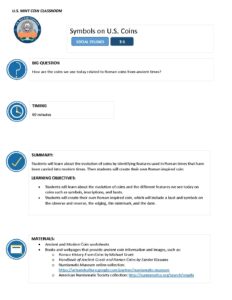 Students will learn about the evolution of coins, and will create their own coin, using the various features that have been carried over into modern times.

1. Introduce the activity by displaying a penny (or project a large image of a penny) for the whole class to see. Ask your students what it is, and what we use it for. Explain to your students that if they look closer at coins, they will see that each one is a piece of artwork that tells us about a country's culture.

2. Ask students to describe what they see on the penny. Some answers might include a face, a date, words, or the edge/rim.

3. Tell students that they are going to look at how the design of the penny came to be. Let students know that the first coins were used thousands of years ago and that we are going to take a look at ancient coins to see if they are the same or different than the coins we use today.

4. Distribute the Ancient and Modern Coin worksheets with images of ancient and currently circulating U.S. coins.

6. Have your student create sketches of the front (obverse) and back (reverse) of the proposed coin. The coin sketches should include a portrait and date on the front and a legend, symbol, and denominational amount on the back.

Teachers can assess the coins and descriptions created by the students regarding following instructions and meeting the lesson objectives.

This lesson plan is not associated with any Common Core Standards.