In 2021, the U.S. Mint releases the Morgan and Peace Dollar Anniversary Coins in recognition of the 100th anniversaries of the last year of minting of the Morgan Silver Dollar and the first year of minting of the Peace Silver Dollar. The conversion from the Morgan Dollar to the Peace Dollar design in 1921 reflected a pivotal moment in American history. The Morgan Dollar represented the country’s westward expansion and industrial development in the late 19th century. The Peace Dollar symbolized the country’s coming of age as an international power, as well as marking the peace between the U.S. and Germany after World War I.

The Morgan Dollar was designed by Mint Chief Engraver George T. Morgan (1845-1925) and was minted from 1878 to 1904, and again in 1921. The Mint will produce the 2021 Morgan Dollar with an uncirculated finish in five versions to recognize the Mint facilities that minted the original coin.

In December 1921, Treasury Secretary Andrew Mellon approved the Peace Dollar to replace the Morgan Dollar. The Peace Dollar was designed by renowned sculptor Anthony de Francisci (1887-1964) and was minted until 1935. The Mint will produce the 2021 Peace Dollar with an uncirculated finish and without a mint mark.

To purchase these coins, visit the U.S. Mint’s online catalog. To learn more about the coins, follow the links below. 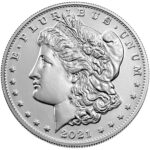 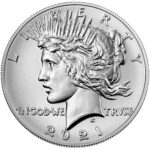