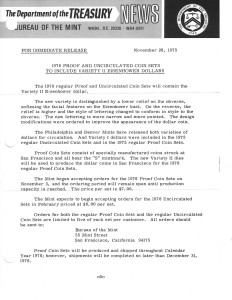 The new variety is distinguished by a lower relief on the obverse, softening the facial features on the Eisenhower bust. On the reverse, the relief is higher and the style of lettering changed to conform in style to the obverse. The new lettering is more narrow and more pointed. The design modifications were ordered to improve the appearance of the dollar coin.

The Mint began accepting orders for the 1976 Proof Coin Sets on November 3, and the ordering period will remain open until production capacity is reached. The price per set is $7.00.

The Mint expects to begin accepting orders for the 1976 Uncirculated Sets in February priced at $6.00 per set.

Orders for both the regular Proof Coin Sets and the regular Uncirculated Sets are limited to five of each set per customer. All orders should be sent to:

Proof Coin Sets will be produced and shipped throughout Calendar Year 1976; however, shipments will be completed no later than December 31, 1976.