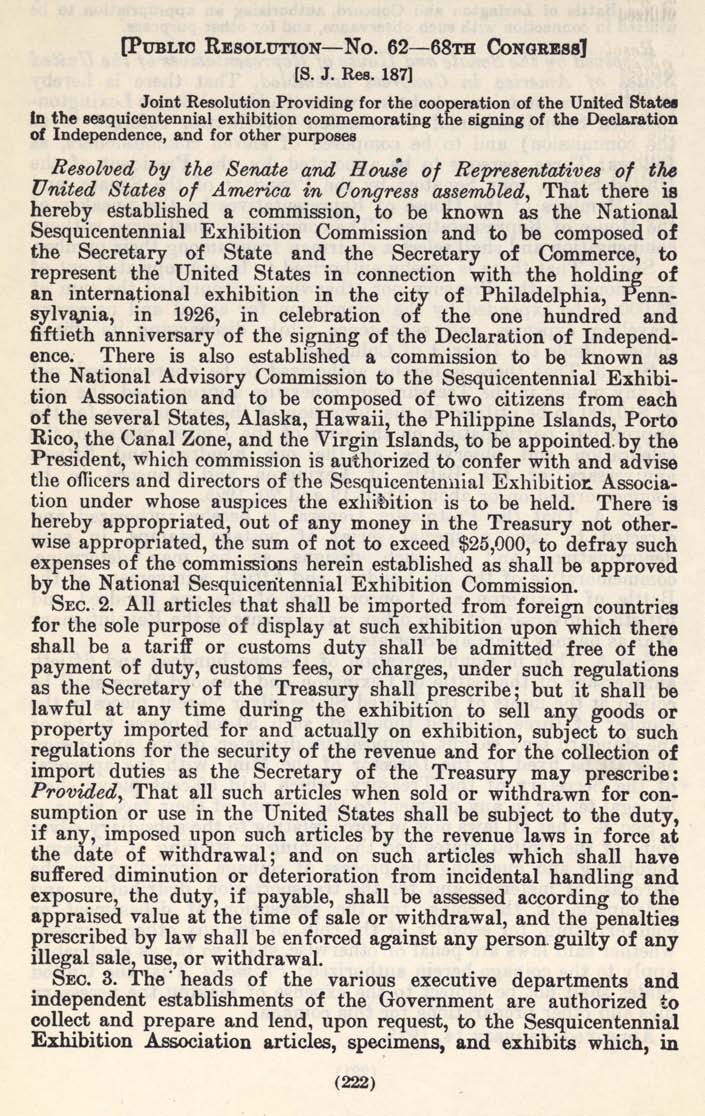 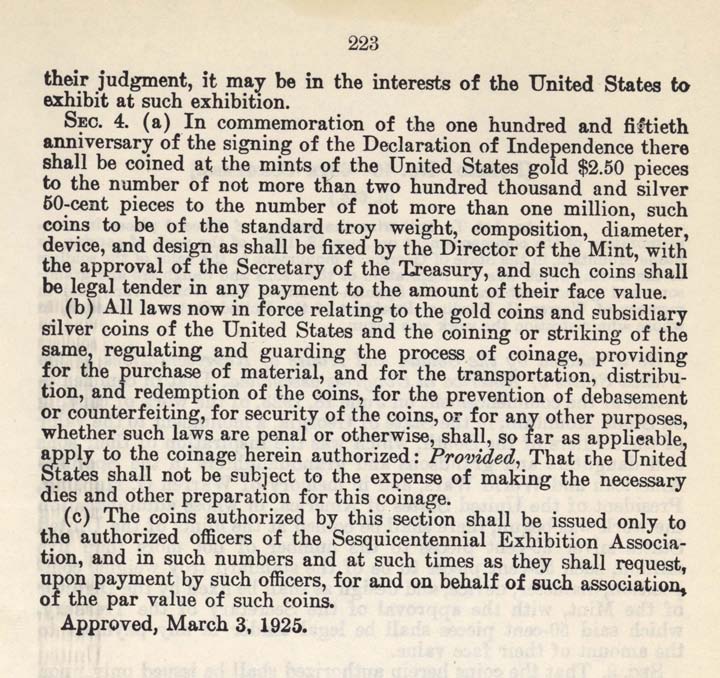 Joint Resolution Providing for the cooperation of the United States in the sesquicentennial exhibition commemorating the signing of the Declaration of Independence, and for other purposes.

Resolved by the Senate and House of Representatives of the United States of America in Congress assembled, That there is hereby established a commission, to be known as the National Sesquicentennial Exhibition Commission and to be composed of the Secretary of State and the Secretary of Commerce, to represent the United States in connection with the holding of an international exhibition in the city of Philadelphia, Pennsylvania, in 1926, in celebration of the one hundred and fiftieth anniversary of the signing of the Declaration of Independence. There is also established a commission to be known as the National Advisory Commission to the Sesquicentennial Exhibition Association and to be composed of two citizens from each of the several States, Alaska, Hawaii, the Philippine Islands, Porto Rico, the Canal Zone, and the Virgin Islands, to be appointed by the President, which commission is authorized to confer with and advise the officers and directors of the Sesquicentennial Exhibitor Association under whose auspices the exhibition is to be held. There is hereby appropriated, out of any money in the Treasury not otherwise appropriated, the sum of not to exceed $25,000, to defray such expenses of the commissions herein established as shall be approved by the National Sesquicentennial Exhibition Commission.

SEC. 2. All articles that shall be imported from foreign countries for the sole purpose of display at such exhibition upon which there shall be a tariff or customs duty shall be admitted free of the payment of duty, customs fees, or charges, under such regulations as the Secretary of the Treasury shall prescribe; but it shall be lawful at any time during the exhibition to sell any goods or property imported for and actually on exhibition, subject to such regulations for the security of the revenue and for the collection import duties as the Secretary of the Treasury may prescribe: Provided, That all such articles when sold or withdrawn for consumption or use in the United States shall be subject to the duty, if any, imposed upon such articles by the revenue laws in force at the date of withdrawal; and on such articles which shall have suffered diminution or deterioration from incidental handling and exposure, the duty, if payable, shall be assessed according to the appraised value at the time of sale or withdrawal, and the penalties prescribed by law shall be enforced against any person guilty of any illegal sale, use, or withdrawal.

SEC. 3. The heads of the various executive departments and independent establishments of the Government are authorized to collect and prepare and lend, upon request, to the Sesquicentennial Exhibition Association articles, specimens, and exhibits which, in their judgment, it may be in the interests of the United States to exhibit at such exhibition.

SEC. 4. (a) In commemoration of the one hundred and fiftieth anniversary of the signing of the Declaration of Independence there shall be coined at the mints of the United States gold $2.50 pieces to the number of not more than two hundred thousand and silver 50-cent pieces to the number of not more than one million, such coins to be of the standard troy weight, composition, diameter, device, and design as shall be fixed by the Director of the Mint, with the approval of the Secretary of the Treasury, and such coins shall be legal tender in any payment to the amount of their face value.

(b) All laws now in force relating to the gold coins and subsidiary silver coins of the United States and the coining or striking of the same, regulating and guarding the process of coinage, providing for the purchase of material, and for the transportation, distribution, and redemption of the coins, for the prevention of debasement or counterfeiting, for security of the coins, or for any other purposes, whether such laws are penal or otherwise, shall, so far as applicable, apply to the coinage herein authorized: Provided, That the United States shall not be subject to the expense of making the necessary dies and other preparation for this coinage.

(c) The coins authorized by this section shall be issued only to the authorized officers of the Sesquicentennial Exhibition Association, and in such numbers and at such times as they shall request, upon payment by such officers, for and on behalf of such association, of the par value of such coins.