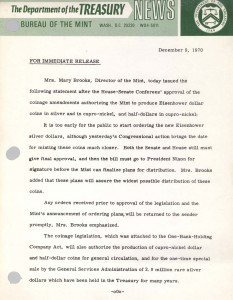 Mrs. Mary Brooks, Director of the Mint, today issued the following statement after the House-Senate Conferees’ approval of the coinage amendments authorizing the Mint to produce Eisenhower dollar coins in silver and in cupro-nickel, and half-dollars in cupro-nickel:

It is too early for the public to start ordering the new Eisenhower silver dollars, although yesterday’s Congressional action brings the date for minting these coins much closer. Both the Senate and House still must give final approval, and then the bill must go to President Nixon for signature before the Mint can finalize plans for distribution. Mrs. Brooks added that these plans will assure the widest possible distribution of these coins.

Any orders received prior to approval of the legislation and the Mint’s announcement of ordering plans will be returned to the sender promptly, Mrs. Brooks emphasized.

The coinage legislation, which was attached to the One-Bank-Holding Company Act, will also authorize the production of cupro-nickel dollar and half-dollar coins for general circulation, and for the one-time special sale by the General Services Administration of 2.9 million rare silver dollars which have been held in the Treasury for many years.