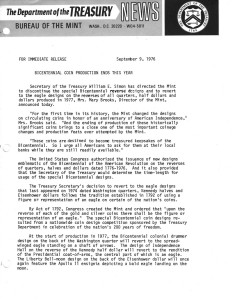 Secretary of the Treasury William E. Simon has directed the Mint to discontinue the special Bicentennial reverse designs and to revert to the eagle designs on the reverses of all quarters, half dollars and dollars produced in 1977, Mrs. Mary Brooks, Director of the Mint, announced today.

“For the first time in its history, the Mint changed the designs on circulating coins in honor of an anniversary of American Independence,” Mrs. Brooks said. “And the ending of production of these historically significant coins brings to a close one of the most important coinage changes and production feats ever attempted by the Mint.

“These coins are destined to become treasured keepsakes of the Bicentennial. So I urge all Americans to ask for them at their local banks while they are still readily available.”

The United States Congress authorized the issuance of new designs emblematic of the Bicentennial of the American Revolution on the reverses of quarters, halves and dollars dated 1776-1976. And it also provided that the Secretary of the Treasury would determine the time-length for usage of the special Bicentennial designs.

The Treasury Secretary’s decision to revert to the eagle designs that last appeared on the 1974 dated Washington quarters, Kennedy halves and Eisenhower dollars follows the tradition established in 1792 of using a figure or representation of an eagle on certain of the nation’s coins.

By Act of 1792, Congress created the Mint and ordered that “upon the reverse of each of the gold and silver coins there shall be the figure or representation of an eagle.” The special Bicentennial coin designs resulted from a nationwide coin design competition sponsored by the Treasury Department in celebration of the nation’s 200 years of freedom.

At the start of production in 1977, the Bicentennial colonial drummer design on the back of the Washington quarter will revert to spread-winged eagle standing on a shaft of arrows. The design of Independence Hall on the reverse of the Kennedy half dollar will revert to the rendition of the Presidential coat-of-arms, the central part of which is an eagle. The Liberty Bell-moon design on the back of the Eisenhower dollar will once again feature the Apollo 11 ensignia depicting a bald eagle landing on the moon.