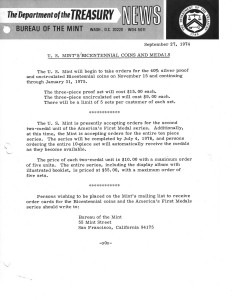 The U.S. Mint will begin to take orders for the 40% silver proof and uncirculated Bicentennial coins on November 15 and continuing through January 31, 1975.

Persons wishing to be placed on the Mint’s mailing list to receive order cards for the Bicentennial coins and the America’s First Medals series should write to: