Bigelow–Pratt Designs for the Half Eagle and Quarter Eagle 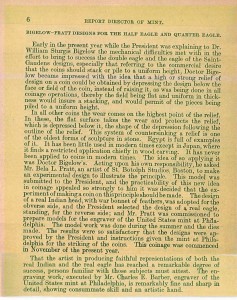 Early in the present year while the President was explaining to Dr. William Sturgis Bigelow the mechanical difficulties met with in the effort to bring to success the double eagle and the eagle of the Saint-Gaudens designs, especially that referring to the commercial desire that the coins should stack or pile to a uniform height, Doctor Bigelow became impressed with the idea that a high or strong relief of design on a coin could be obtained by depressing the design below the face or field of the coin, instead of raising it, as was being done in all coinage operations, thereby the field being flat and uniform in thickness would insure a stacking, and would permit of the pieces being piled to a uniform height.

In all other coins the wear comes on the highest point of the relief. In these, the flat surface takes the wear and protects the relief, which is depressed below it, the shape of the depression following the outline of the relief. This system of countersinking a relief is one of the oldest forms of sculpture in stone. Egypt is full of examples of it. It has been little used in modern times except in Japan, where it finds a restricted application chiefly in wood carving. It has never been applied to coins in modern times. The idea of so applying it was Doctor Bigelow’s. Acting upon his own responsibility, he asked Mr. Bela L. Pratt, an artist of St. Botolph Studios, Boston, to make an experimental design to illustrate the principle. This model was submitted to the President, and the practicability of this new idea in coinage appealed so strongly to him it was decided that the experiment of making a coin on this principle should be made. The design of a real Indian head, with war bonnet of feathers, was adopted for the obverse side, and the President selected the design of a real eagle, standing, for the reverse side; and Mr. Pratt was commissioned to prepare models for the engraver of the United States mint at Philadelphia. The model work was done during the summer and the dies made. The results were so satisfactory that the designs were approved by the President and instructions given the mint at Philadelphia for the striking of the coins. This coinage was commenced in November of the present year.

That the artist in producing faithful representations of both the real Indian and the real eagle has reached a remarkable degree of success, persons familiar with those subjects must attest. The engraving work, executed by Mr. Charles E. Barber, engraver of the United States mint at Philadelphia, is remarkably fine and sharp in detail, showing consummate skill and an artistic hand.