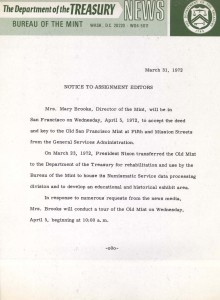 Mrs. Mary Brooks, Director of the Mint, will be in San Francisco on Wednesday, April 5, 1972, to accept the deed and key to the Old San Francisco Mint at Fifth and Mission Streets from the General Services Administration.

On March 23, 1972, President Nixon transferred the Old Mint to the Department of the Treasury for rehabilitation and use by the Bureau of the Mint to house its Numismatic Service data processing division and to develop an educational and historical exhibit area.

In response to numerous requests from the news media, Mrs. Brooks will conduct a tour of the Old Mint on Wednesday, April 5, beginning at 10:00 a.m.