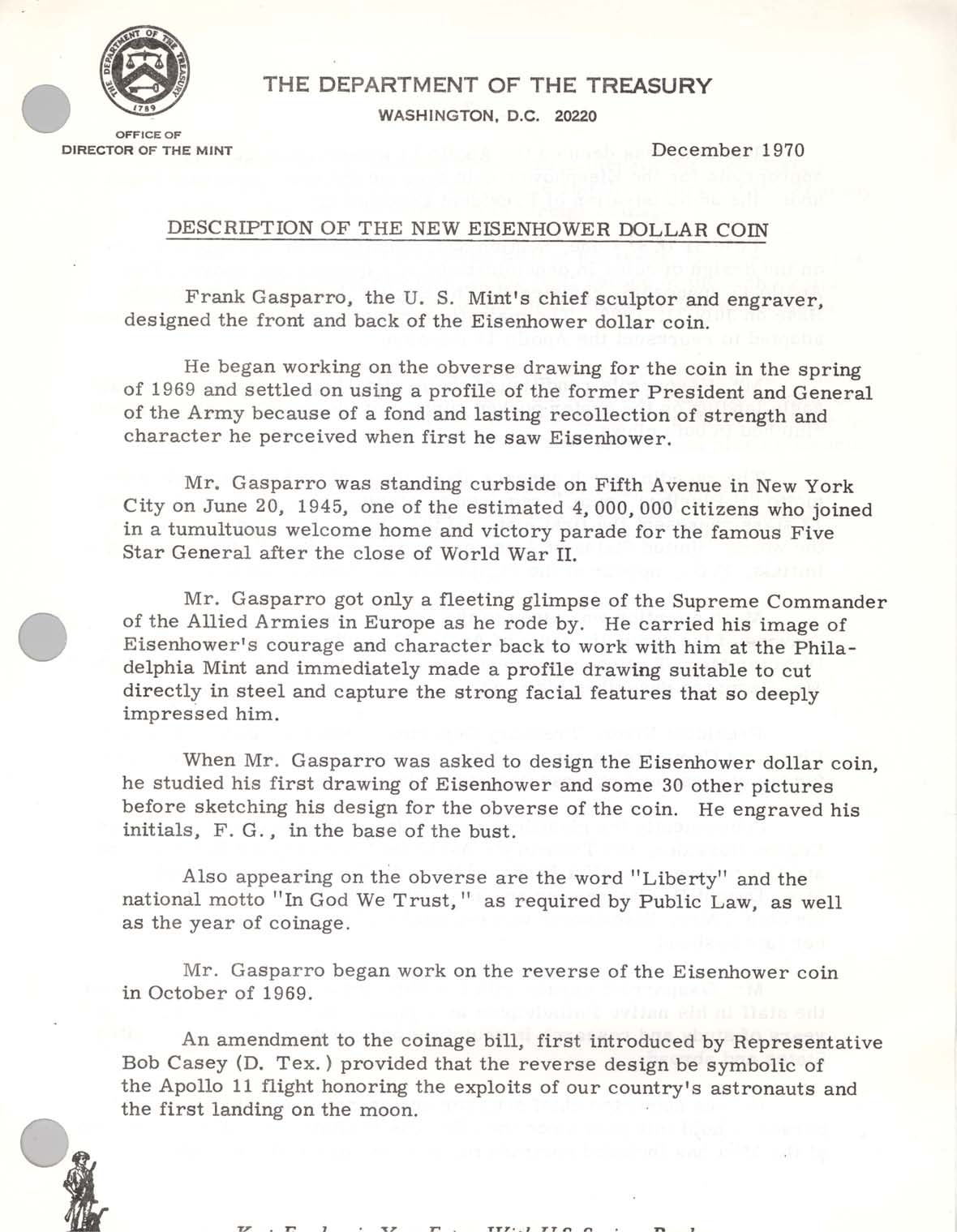 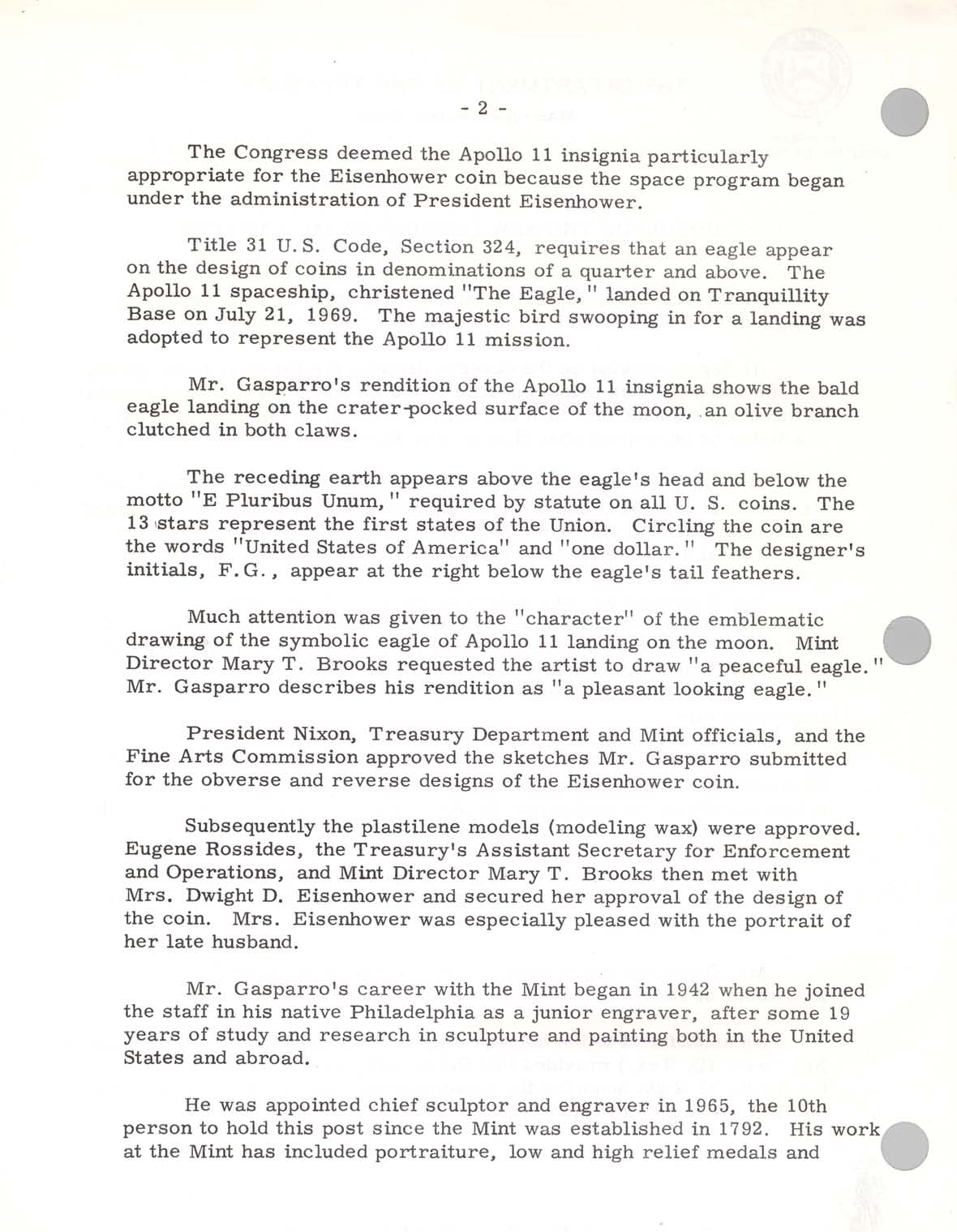 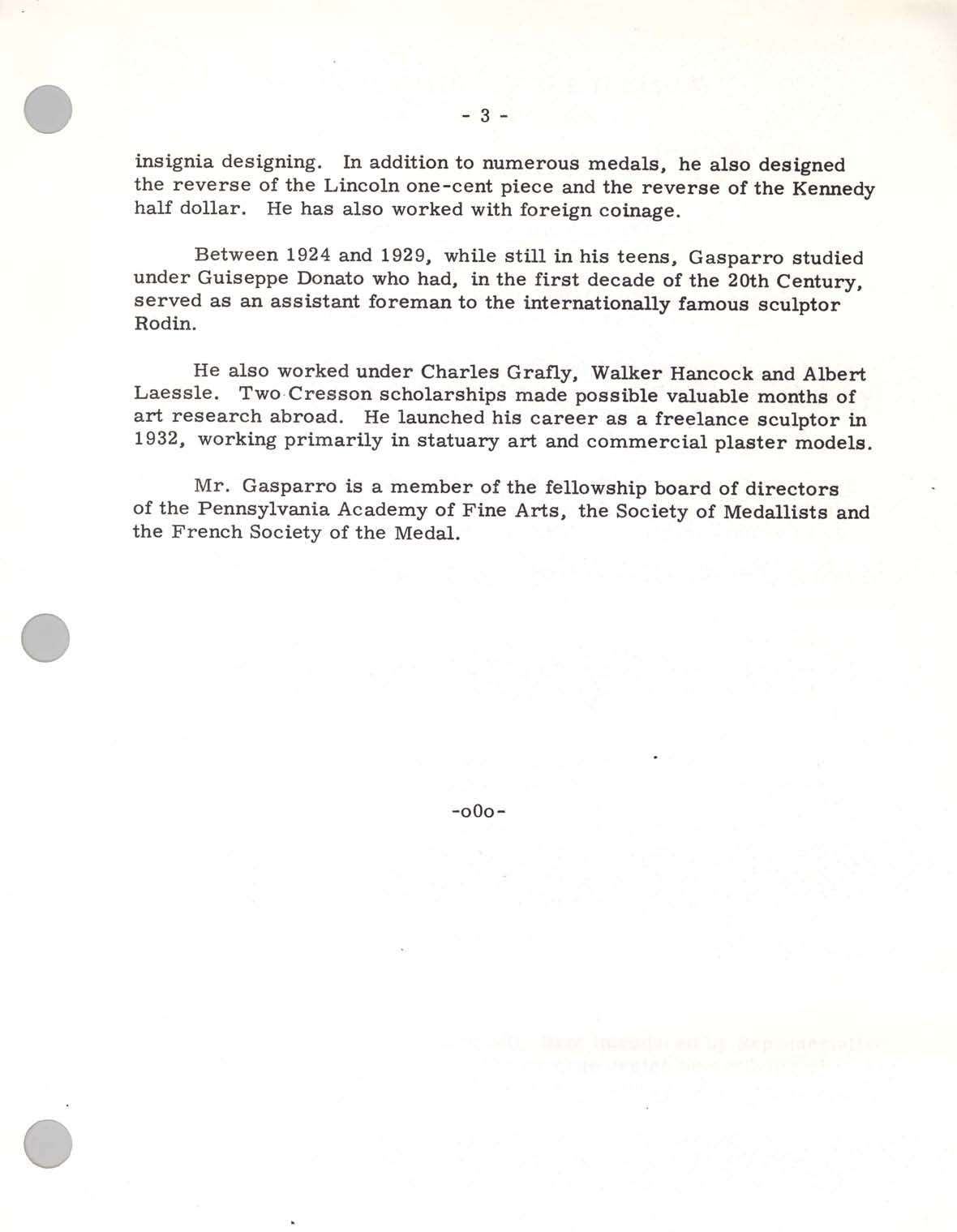 Frank Gasparro, the U.S. Mint’s chief sculptor and engraver, designed the front and back of the Eisenhower dollar coin.

He began working on the obverse drawing for the coin in the spring of 1969 and settled on using a profile of the former President and General of the Army because of a fond and lasting recollection of strength and character he perceived when first he saw Eisenhower.

Mr. Gasparro was standing curbside on Fifth Avenue in New York City on June 20, 1945, one of the estimated 4,000,000 citizens who joined in a tumultuous welcome home and victory parade for the famous Five Star General after the close of World War II.

Mr. Gasparro got only a fleeting glimpse of the Supreme Commander of the Allied Armies in Europe as he rode by. He carried his image of Eisenhower’s courage and character back to work with him at the Philadelphia Mint and immediately made a profile drawing suitable to cut directly in steel and capture the strong facial features that so deeply impressed him.

When Mr. Gasparro was asked to design the Eisenhower dollar coin, he studied his first drawing of Eisenhower and some 30 other pictures before sketching his design for the obverse of the coin. He engraved his initials, F.G., in the base of the bust.

Also appearing on the obverse are the word “Liberty” and the national motto “In God We Trust,” as required by Public Law, as well as the year of coinage.

Mr. Gasparro began work on the reverse of the Eisenhower coin in October of 1969.

An amendment to the coinage bill, first introduced by Representative Bob Casey (D. Tex.) provided that the reverse design be symbolic of the Apollo 11 flight honoring the exploits of our country’s astronauts and the first landing on the moon.

The Congress deemed the Apollo 11 insignia particularly appropriate for the Eisenhower coin because the space program began under the administration of President Eisenhower.

Title 31 U.S. Code, Section 324, requires that an eagle appear on the design of coins in denominations of a quarter and above. The Apollo 11 spaceship, christened “The Eagle,” landed on Tranquillity Base on July 21, 1969. The majestic bird swooping in for a landing was adopted to represent the Apollo 11 mission.

Mr. Gasparro’s rendition of the Apollo 11 insignia shows the bald eagle landing on the crater-pocked surface of the moon, an olive branch clutched in both claws.

The receding earth appears above the eagle’s head and below the motto “E Pluribus Unum,” required by statute on all U.S. coins. The 13 stars represent the first states of the Union. Circling the coin are the words “United States of America” and “one dollar.” The designer’s initials, F.G., appear at the right below the eagle’s tail feathers.

Much attention was given to the “character” of the emblematic drawing of the symbolic eagle of Apollo 11 landing on the moon. Mint Director Mary T. Brooks requested the artist to draw “a peaceful eagle.” Mr. Gasparro describes his rendition as “a pleasant looking eagle.”

President Nixon, Treasury Department and Mint officials, and the Fine Arts Commission approved the sketches Mr. Gasparro submitted for the obverse and reverse designs of the Eisenhower coin.

Subsequently the plastilene models (modeling wax) were approved. Eugene Rossides, the Treasury’s Assistant Secretary for Enforcement and Operations, and Mint Director Mary T. Brooks then met with Mrs. Dwight D. Eisenhower and secured her approval of the design of the coin. Mrs. Eisenhower was especially pleased with the portrait of her late husband.

Mr. Gasparro’s career with the Mint began in 1942 when he joined the staff in his native Philadelphia as a junior engraver, after some 19 years of study and research in sculpture and painting both in the United States and abroad.

He was appointed chief sculptor and engraver in 1965, the 10th person to hold this post since the Mint was established in 1792. His work at the Mint has included portraiture, low and high relief medals and insignia designing. In addition to numerous medals, he also designed the reverse of the Lincoln one-cent piece and the reverse of the Kennedy half dollar. He has also worked with foreign coinage.

Between 1924 and 1929, while in his teens, Gasparro studied under Guiseppe Donato who had, in the first decade of the 20th Century, served as an assistant foreman to the internationally famous sculptor Rodin.

He also worked under Charles Grafly, Walker Hancock and Albert Laessle. Two Cresson scholarships made possible valuable months of art research abroad. He launched his career as a freelance sculptor in 1932, working primarily in statuary art and commercial plaster models.

Mr. Gasparro is a member of the fellowship board of directors of the Pennsylvania Academy of Fine Arts, the Society of Medallists and the French Society of the Medal.