U.S. Gold Medallions To Be Sold In “Sets Only” Through Telephone Ordering System 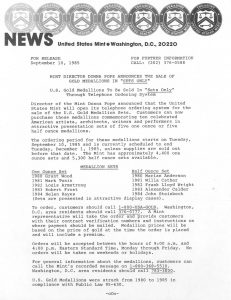 Director of the Mint Donna Pope announced that the United States Mint will open its telephone ordering system for the sale of the U.S. Gold Medallion Sets. Customers can now purchase these medallions commemorating ten celebrated American artists, architects, writers and performers in attractive presentation sets of five one ounce or five half ounce medallions.

The ordering period for these medallions starts on Tuesday, September 10, 1985 and is currently scheduled to end Tuesday, December 1, 1985, unless supplies are sold out before that date. The Mint has approximately 4,400 one ounce sets and 5,300 half ounce sets available.

To order, customers should call 1-800-USA-GOLD. Washington, D.C. area residents should call 376-0777. A Mint representative will take the order and provide customers with their contract verification numbers and instructions on where payment should be mailed. Medallion prices will be based on the price of gold at the time the order is placed and will include a premium.

Orders will be accepted between the hours of 9:00 a.m. and 4:00 p.m. Eastern Standard Time, Monday through Friday. No orders will be taken on weekends or holidays.