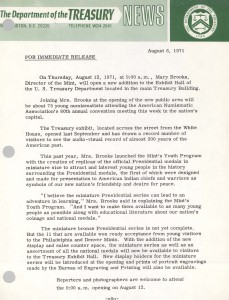 On Thursday, August 12, 1971, at 9:00 a.m., Mary Brooks, Director of the Mint, will open a new addition to the Exhibit Hall of the U.S. Treasury Department located in the main Treasury Building.

Joining Mrs. Brooks at the opening of the new public area will be about 75 young numismatists attending the American Numismatic Association’s 80th annual convention meeting this week in the nation’s capital.

The Treasury exhibit, located across the street from the White House, opened last September and has drawn a record number of visitors to see the audio-visual record of almost 200 years of the American past.

This past year, Mrs. Brooks launched the Mint’s Youth Program with the creation of replicas of the official Presidential medals in miniature size to attract and interest young people in the history surrounding the Presidential medals, the first of which were designed and made for presentation to American Indian chiefs and warriors as symbols of our new nation’s friendship and desire for peace.

“I believe the miniature Presidential series can lead to an adventure in learning,” Mrs. Brooks said in explaining the Mint’s Youth Program. “And I want to make them available to as many young people as possible along with educational literature about our nation’s coinage and national medals.”

The miniature bronze Presidential series is not yet complete. But the 11 that are available won ready acceptance from young visitors to the Philadelphia and Denver Mints. With the addition of the new display and sales counter space, the miniature series as well as an assortment of all the national medals will now be available to visitors to the Treasury Exhibit Hall. New display holders for the miniature series will be introduced at the opening and prints of portrait engravings made by the Bureau of Engraving and Printing will also be available.

Reporters and photographers are welcome to attend the 9:00 a.m. opening on August 12.