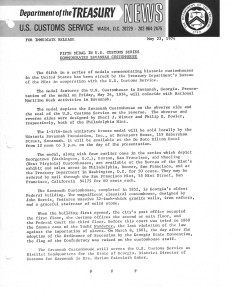 The fifth in a series of medals commemorating historic customhouses in the United States has been struck by the Treasury Department’s Bureau of the Mint in cooperation with the U.S. Customs Service.

The medal features the U.S. Customhouse in Savannah, Georgia. Presentation of the medal on Friday, May 24, 1974, will coincide with National Maritime Week activities in Savannah.

The medal depicts the Savannah Customhouse on the obverse side and the seal of the U.S. Customs Service on the reverse. The obverse and reverse sides were designed by Sherl J. Winter and Philip E. Fowler, respectively, both of the Philadelphia Mint.

The 1-5/16-inch miniature bronze medal will be sold locally by the Historic Savannah Foundation, Inc., at Davenport House, 119 Habersham Street, Savannah. It will be available at the De Soto Hilton Hotel from 12 noon to 3 p.m. on the day of the presentation.

When the building first opened, the city’s post office occupied the first floor, the Customs offices the second or main floor, and the Federal Court the third floor. Before this court was tried in 1860 the famous case of the Yacht Wanderer, the last violation of the law against the importation of slaves. On March 8, 1861, the day after the adoption of the Ordinance of Secession by the Georgia State Convention, the flag of the Confederacy was raised on the customhouse staff.

The Savannah Customhouse still serves the U.S. Customs Service as District headquarters for the State of Georgia. District Director of the Customs for Savannah is Mrs. Marion Faircloth Baker.