First Eisenhower Proof Dollars to Be Mailed on October 14, 1971 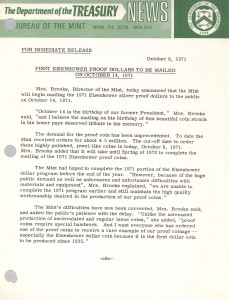 Mrs. Brooks, Director of the Mint, today announced that the Mint will begin mailing the 1971 Eisenhower silver proof dollars to the public on October 14, 1971.

“October 14 is the birthday of our former President,” Mrs. Brooks said, “and I believe the mailing on his birthday of this beautiful coin struck in his honor pays deserved tribute to his memory.”

The demand for the proof coin has been unprecedented. To date the Mint received orders for about 4.5 million. The cut-off date to order these highly polished, jewel-like coins is today, October 8, 1971. Mrs. Brooks added that it will take until Spring of 1972 to complete the mailing of the 1971 Eisenhower proof coins.

The Mint had hoped to complete the 1971 portion of the Eisenhower dollar program before the end of the year. “However, because of the huge public demand as well as unforeseen and unfortunate difficulties with materials and equipment”, Mrs. Brooks explained, “we are unable to complete the 1971 program earlier and still maintain the high quality workmanship desired in the production of our proof coins.”

The Mint’s difficulties have now been corrected, Mrs. Brooks said, and asked the public’s patience with the delay. “Unlike the automated production of uncirculated and regular issue coins,” she added, “proof coins require special handwork. And I want everyone who has ordered one of the proof coins to receive a rare example of our proof coinage — especially the Eisenhower dollar coin because it is the first dollar coin to be produced since 1935.