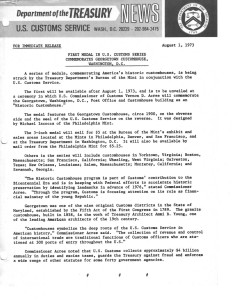 A series of medals, commemorating America’s historic customhouses, is being struck by the Treasury Department’s Bureau of the Mint in conjunction with the U.S. Customs Service.

The first will be available after August 1, 1973, and is to be unveiled at a ceremony in which U.S. Commissioner of Customs Vernon D. Acree will commemorate the Georgetown, Washington, D.C., Post Office and Customhouse building as an “Historic Customhouse.”

The medal features the Georgetown Customhouse, circa 1900, on the obverse side and the seal of the U.S. Customs Service on the reverse. It was designed by Michael Iacocca of the Philadelphia Mint.

The 3-inch medal will sell for $5 at the Bureau of the Mint’s exhibit and sales areas located at the Mints in Philadelphia, Denver, and San Francisco, and at the Treasury Department in Washington, D. C. It will also be available by mail order from the Philadelphia Mint for $5.25.

“The Historic Customhouse program is part of Customs’ contribution to the Bicentennial Era and is in keeping with Federal efforts to accelerate historic preservation by identifying landmarks in advance of 1976,” stated Commissioner Acree. “Through the program, Customs is focusing attention on its role as financial mainstay of the young Republic.”

Georgetown was one of the nine original Customs districts in the State of Maryland, established by the Fifth Act of the First Congress in 1789. The granite customhouse, built in 1858, is the work of Treasury Architect Ammi B. Young, one of the leading American architects of the 19th century.

“Customhouses symbolize the deep roots of the U.S. Custom Service in American history,” Commissioner Acree said. “The collection of revenue and control of international trade are traditional functions of Customs officers who are stationed at 300 ports of entry throughout the U.S.”

Commissioner Acree noted that U.S. Customs collects approximately $4 billion annually in duties and excise taxes, guards the Treasury against fraud and enforces a wide range of other statutes for some forty government agencies.