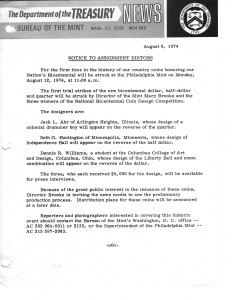 For the first time in the history of our country coins honoring our Nation’s Bicentennial will be struck at the Philadelphia Mint on Monday, August 12, 1974, at 11:00 a.m.

The first trial strikes of the new bicentennial dollar, half-dollar and quarter will be struck by Director of the Mint Mary Brooks and the three winners of the National Bicentennial Coin Design Competition.

Jack L. Ahr of Arlington Heights, Illinois, whose design of a colonial drummer boy will appear on the reverse of the quarter.

Seth G. Huntington of Minneapolis, Minnesota, whose design of Independence Hall will appear on the reverse of the half dollar.

Dennis R. Williams, a student at the Columbus College of Art and Design, Columbus, Ohio, whose design of the Liberty Bell and moon combination will appear on the reverse of the dollar.

The three, who each received $5,000 for his design, will be available for press interviews.

Because of the great public interest in the issuance of these coins, Director Brooks is inviting the news media to see the preliminary production process. Distribution plans for these coins will be announced at a later date.

Reporters and photographers interested in covering this historic event should contact the Bureau of the Mint’s Washington, D.C. office—AC 202 964-5011 or 2133, or the Superintendent of the Philadelphia Mint—AC 215 597-2063.