Treasury Says Gold Medallions Can Be Offered for Sale in 1980 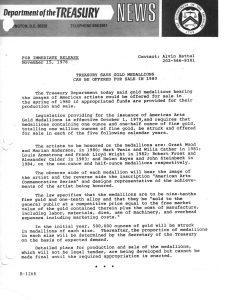 The Treasury Department today said gold medallions bearing the images of American artists could be offered for sale in the spring of 1980 if appropriated funds are provided for their production and sale.

Legislation providing for the issuance of American Arts Gold Medallions is effective October 1, 1979, and requires that medallions containing one ounce and one-half ounce of fine gold, totalling one million ounces of fine gold, be struck and offered for sale in each of the five following calendar years.

The artists to be honored on the medallions are: Grant Wood and Marian Anderson, in 1980; Mark Twain and Willa Cather in 1981; Louis Armstrong and Frank Lloyd Wright in 1982; Robert Frost and Alexander Calder in 1983; and Helen Hayes and John Steinbeck in 1984, on the one-ounce and half-ounce medallions respectively.

The obverse side of each medallion will bear the image of the artist and the reverse side the inscription “American Arts Commemorative Series” and designs representative of the achievements of the artist being honored.

The law specifies that the medallions are to be nine-tenths fine gold and one-tenth alloy and that they be “sold to the general public at a competitive price equal to the free market value of the gold contained therein plus the cost of manufacture, including labor, materials, dies, use of machinery, and overhead expenses including marketing costs.”

In the initial year, 500,000 ounces of gold will be struck in medallions of each size. Thereafter, the proportion of medallions in each size will be determined by the Secretary of the Treasury on the basis of expected demand.

Detailed plans for production and sale of the medallions, which will not be legal tender, are being developed but cannot be made final until the required appropriation is enacted.