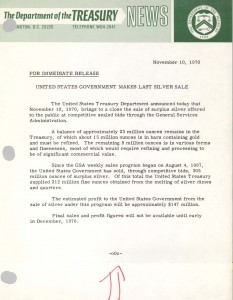 The United States Treasury Department announced today that November 10, 1970, brings to a close the sale of surplus silver offered to the public at competitive sealed bids through the General Services Administration.

Since the GSA weekly sales program began on August 4, 1967, the United States Government has sold, through competitive bids, 305 million ounces of surplus silver. Of this total the United States Treasury supplied 212 million fine ounces obtained from the melting of silver dimes and quarters.

The estimated profit to the United States Government from the sale of silver under this program will be approximately $147 million.

Final sales and profit figures will not be available until early in December, 1970.