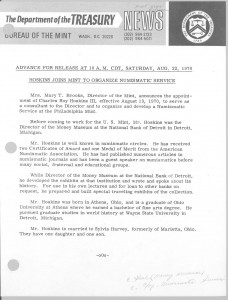 Mrs. Mary T. Brooks, Director of the Mint, announces the appointment of Charles Roy Hoskins III, effective August 13, 1970, to serve as a consultant to the Director and to organize and develop a Numismatic Service at the Philadelphia Mint.

Before coming to work for the U.S. Mint, Mr. Hoskins was the Director of the Money Museum at the National Bank of Detroit in Detroit, Michigan.

Mr. Hoskins is well known in numismatic circles. He has received two Certificates of Award and one Medal of Merit from the American Numismatic Association. He has had published numerous articles in numismatic journals and has been a guest speaker on numismatics before many social, fraternal and educational groups.

While Director of the Money Museum at the National Bank of Detroit, he developed the exhibits at that institution and wrote and spoke about its history. For use in his own lectures and for loan to other banks on request, he prepared and built special traveling exhibits of the collection.

Mr. Hoskins was born in Athens, Ohio, and is a graduate of Ohio University at Athens where he earned a bachelor of fine arts degree. He pursued graduate studies in world history at Wayne State University in Detroit, Michigan.

Mr. Hoskins is married to Sylvia Harvey, formerly of Marietta, Ohio. They have one daughter and one son.