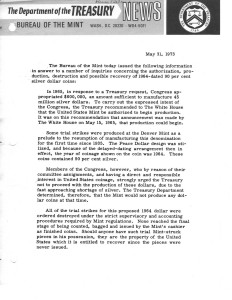 The Bureau of the Mint today issued the following information in answer to a number of inquiries concerning the authorization, production, destruction and possible recovery of 1964-dated 90 per cent silver dollar coins:

In 1965, in response to a Treasury request, Congress appropriated $600,000, an amount sufficient to manufacture 45 million silver dollars. To carry out the expressed intent of the Congress, the Treasury recommended to The White House that the United States Mint be authorized to begin production. It was on this recommendation that announcement was made by The White House on May 15, 1965, that production could begin.

Some trial strikes were produced at the Denver Mint as a prelude to the resumption of manufacturing this denomination for the first time since 1935. The Peace Dollar design was utilized, and because of the delayed-dating arrangement then in effect, the year coinage shown on the coin was 1964. These coins contained 90 per cent silver.

Members of the Congress, however, who by reason of their committee assignments, and having a direct and responsible interest in United States coinage, strongly urged the Treasury not to proceed with the production of these dollars, due to the fast approaching shortage of silver. The Treasury Department determined, therefore, that the Mint would not produce any dollar coins at that time.

All of the trial strikes for this proposed 1964 dollar were ordered destroyed under the strict supervisory and accounting procedures required by Mint regulations. None reached the final stage of being counted, bagged and issued by the Mint’s cashier as finished coins. Should anyone have such trial Mint-struck pieces in his possession, they are the property of the United States which it is entitled to recover since the pieces were never issued.