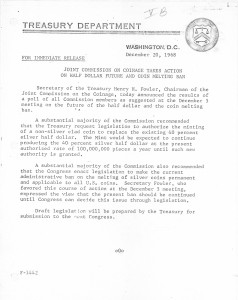 Secretary of the Treasury Henry H. Fowler, Chairman of the Joint Commission on the Coinage, today announced the results of a poll of all Commission members as suggested at the December 5 meeting on the future of the half dollar and the coin melting ban.

A substantial majority of the Commission recommended that the Treasury request legislation to authorize the minting of a non-silver clad coin to replace the existing 40 percent silver half dollar. The Mint would be expected to continue producing the 40 percent silver half dollar at the present authorized rate of 100,000,000 pieces a year until such new authority is granted.

A substantial majority of the Commission also recommended that the Congress enact legislation to make the current administrative ban on the melting of silver coins permanent and applicable to all U.S. coins. Secretary Fowler, who favored this course of action at the December 5 meeting, expressed the view that the present ban should be continued until Congress can decide this issue through legislation.

Draft legislation will be prepared by the Treasury for submission to the next Congress.