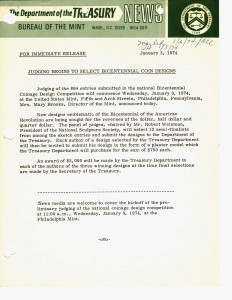 New designs emblematic of the Bicentennial of the American Revolution are being sought for the reverses of the dollar, half dollar and quarter dollar. The panel of judges, chaired by Mr. Robert Weinman, President of the National Sculpture Society, will select 12 semi-finalists from among the sketch entries and submit the designs to the Department of the Treasury. Each author of a design selected by the Treasury Department will then be invited to submit his design in the form of a plaster model which the Treasury Department will purchase for the sum of $750 each.

News media are welcome to cover the kickoff of the preliminary judging of the national coinage design competition at 11:00 a.m., Wednesday, January 9, 1974, at the Philadelphia Mint.