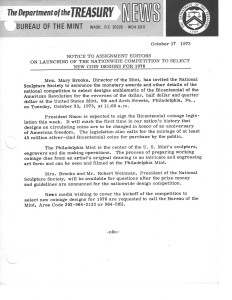 Mrs. Mary Brooks, Director of the Mint, has invited the National Sculpture Society to announce the monetary awards and other details of the national competition to select designs emblematic of the Bicentennial of the American Revolution for the reverses of the dollar, half dollar and quarter dollar at the United States Mint, 5th and Arch Streets, Philadelphia, Pa., on Tuesday, October 23, 1973, at 11:00 a.m.

President Nixon is expected to sign the Bicentennial coinage legislation this week. It will mark the first time in our nation’s history that designs on circulating coins are to be changed in honor of an anniversary of American freedom. The legislation also calls for the mintage of at least 45 million silver-clad Bicentennial coins for purchase by the public.

The Philadelphia Mint is the center of the U.S. Mint’s sculptors, engravers and die making operations. The process of preparing working coinage dies from an artist’s original drawing is an intricate and engrossing art form and can be seen and filmed at the Philadelphia Mint.

Mrs. Brooks and Mr. Robert Weinman, President of the National Sculpture Society, will be available for questions after the prize money and guidelines are announced for the nationwide design competition.