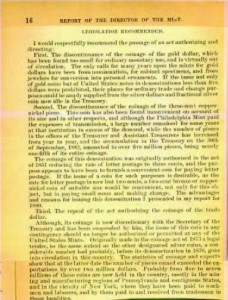 I would respectfully recommend the passage of an act authorizing and directing:

First. The discontinuance of the coinage of the gold dollar, which has been found too small for ordinary monetary use, and is virtually out of circulation. The only calls for many years upon the mints for gold dollars have been numismatists, for cabinet specimens, and from jewelers for conversion into personal ornaments. If the issue not only of gold coins but of United States notes in denominations less than five dollars were prohibited, their places for ordinary trade and change purposes could be amply supplied from the silver dollars and fractional silver coin now idle in the Treasury.

Second. The discontinuance of the coinage of the three-cent copper-nickel piece. This coin has also been found inconvenient on account of its size and in other respects, and although the Philadelphia Mint paid the expenses of transmission, a large number remained for some years at that institution in excess of the demand, while the number of pieces in the offices of the Treasurer and Assistant Treasurers has increased from year to year, and the accumulation in the Treasury on the 30th of September, 1882, amounted to over five million pieces, being nearly one-fifth of its entire coinage.

The coinage of this denomination was originally authorized in the act of 1851 reducing the rate of letter postage to three cents, and the purpose appears to have been to furnish a convenient coin for paying letter postage. If the issue of a coin for such purposes is desirable, as the rate for letter postage is now but two cents, a two-cent bronze or copper-nickel coin of suitable size would be convenient, not only for this object, but in paying small sums and making change. The advantages and reasons for issuing this denomination I presented in my report for 1880.

Third. The repeal of the act authorizing the coinage of the trade dollar.

Although, its coinage is now discretionary with the Secretary of the Treasury and has been suspended by him, the issue of this coin in any contingency should no longer be authorized or permitted at any of the United States Mints. Originally made in the coinage act of 1873 a legal tender, to the same extent as the other designated silver coins, a considerable number had probably, before its demonetization in 1876, gone into circulation in this country. The statistics of coinage and exports show that at the latter date the number of pieces coined exceeded the exportations by over two million dollars. Probably from five to seven millions of these coins are now held in the country, mostly in the mining and manufacturing regions of Pennsylvania and contiguous States, and in the vicinity of New York, where they have been paid to workmen and laborers, and by them paid to and received from tradesmen in those localities.

While the United States has incurred no legal liability, yet by the act of the Government the coins were at first put into circulation and given compulsory currency, and have fallen into the hands of those who can ill afford to suffer from the depreciation, and it would seem but an act of justice that the United States should permit these coins to be sent to the mints and exchanged for other silver coins, into which they could be profitably recoined.

I doubt not that action of this kind would have long since been taken, but for the apprehension that a large number of exported trade dollars would be returned to this country. My own investigations and inquiries have satisfied me that the trade dollars sent to China have gone to the melting pots and become sycee silver or disappeared in the interior of that country; for, although their value as silver bullion would be only about eighty-seven cents, yet their commercial market value in New York City has, prior to the late movement to depress their price, fallen below ninety-eight cents but once, and that for a short period, and has usually ranged for several years above ninety-nine cents, and had it been possible to secure trade dollars for import from China to this country, the profits on the operation would have brought them here long since.