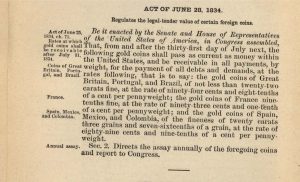 SEC. 2. Directs the assay annually of the foregoing coins and report to Congress.