Letter From Director Adams to a Constituent Announcing Kennedy Half-Dollar 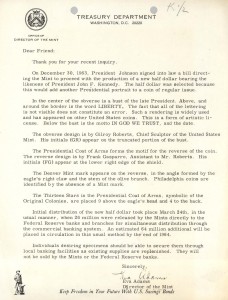 Thank you for your recent inquiry:

On December 30, 1963, President Johnson signed into law a bill directing the Mint to proceed with the production of a new half dollar bearing the likeness of President John F. Kennedy. The half dollar was selected because this would add another Presidential portrait to a coin of regular issue.

In the center of the obverse is a bust of the late President. Above, and around the border is the word LIBERTY. The fact that all of the lettering is not visible does not constitute an error. Such a rendering is widely used and has appeared on other United States coins. This is a form of artistic license. Below the bust is the motto IN GOD WE TRUST, and the date.

The obverse design is by Gilroy Roberts, Chief Sculptor of the United States Mint. His initials (GR) appear on the truncated portion of the bust.

The Presidential Coat of Arms forms the motif for the reverse of the coin. The reverse design is by Frank Gasparro, Assistant to Mr. Roberts. His initials (FG) appear at the lower right edge of the shield.

The Denver Mint mark appears on the reverse, in the angle formed by the eagle’s right claw and the stem of the olive branch. Philadelphia coins are identified by the absence of a Mint mark.

The Thirteen Stars in the Presidential Coat of Arms, symbolic of the Original Colonies, are placed 9 above the eagle’s head and 4 to the back.

Initial distribution of the new half dollar took place March 24th, in the usual manner, when 26 million were released by the Mints directly to the Federal Reserve banks and branches for simultaneous distribution through the commercial banking system. And estimated 64 million additional will be placed in circulation in this usual method by the end of 1964.

Individuals desiring specimens should be able to secure them through local banking facilities as existing supplies are replenished. They will not be sold by the Mints or the Federal Reserve banks.