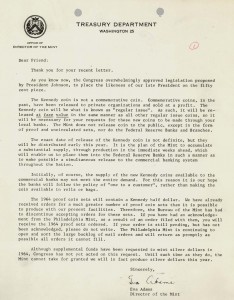 Thank you for your recent letter:

As you know now, the Congress overwhelmingly approved legislation proposed by President Johnson, to place the likeness of our late President on the fifty cent piece.

The Kennedy coin is not a commemorative coin. Commemorative coins, in the past, have been released to private organizations and sold at a profit. The Kennedy coin will be what is known as “regular issue”. As such, it will be released at face value in the same manner as all other regular issue coins, so it will be necessary for your requests for these new coins to be made through your local banks. The Mint does not release coin to the public, except in the form of proof and uncirculated sets, nor do the Federal Reserve Banks and Branches.

The exact date of release of the Kennedy coin is not definite, but they will be distributed early this year. It is the plan of the Mint to accumulate a substantial supply, through production in the immediate weeks ahead, which to make possible a simultaneous release to the commercial banking system throughout the Nation.

Initially, of course, the supply of the new Kennedy coins available to the commercial banks may not meet the entire demand. For this reason it is our hope the banks will follow the policy of “one to a customer”, rather than making the coin available in rolls or bags.

The 1964 proof coin sets will contain a Kennedy half dollar. We have already received orders for a much greater number of proof coin sets than it is possible to produce with our present facilities. Therefore, the Bureau of the Mint has had to discontinue accepting orders for these sets. If you have had an acknowledgement from the Philadelphia Mint, as a result of an order filed with them, you will receive the 1964 proof sets ordered. If your order is still pending, but has not been acknowledged, please do not write. The Philadelphia Mint is continuing to open and sort the large backlog of mail orders and will return as promptly as possible all orders it cannot fill.

Although supplemental funds have been requested to mint silver dollars in 1964, Congress has not yet acted on this request. Until such time as they do, the Mint cannot take for granted we will in fact produce silver dollars this year.