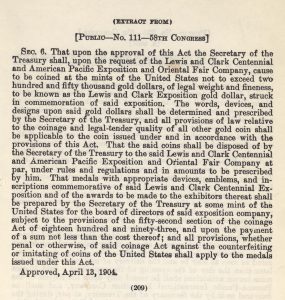 SEC. 6. That upon the approval of this Act the Secretary of the Treasury shall, upon the request of the Lewis and Clark Centennial and American Pacific Exposition and Oriental Fair Company, cause to be coined at the mints of the United States not to exceed two hundred and fifty thousand gold dollars, of legal weight and fineness, to be known as the Lewis and Clark Exposition gold dollar, struck in commemoration of said exposition. The words, devices, and designs upon said gold dollars shall be determined and prescribed by the Secretary of the Treasury, and all provisions of law relative to the coinage and legal-tender quality of all other gold coin shall be applicable to the coin issued under and in accordance with the provisions of this Act. That the said coins shall be disposed of by the Secretary of the Treasury to the said Lewis and Clark Centennial and American Pacific Exposition and Oriental Fair Company at par, under rules and regulations and in amounts to be prescribed by him. That medals with appropriate devices, emblems, and inscriptions commemorative of said Lewis and Clark Centennial Exposition and of the awards to be made to the exhibitors thereat shall be prepared by the Secretary of the Treasury at some mint of the United States for the board of directors of said exposition company, subject to the provisions of the fifty-second section of the coinage Act of eighteen hundred and ninety-three, and upon the payment of a sum not less than the cost thereof; and all provisions, whether penal or otherwise, of said coinage Act against the counterfeiting or imitating of coins of the United States shall apply to the medals issued under this Act.