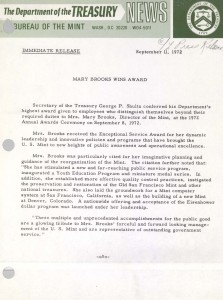 Secretary of the Treasury George P. Schultz conferred his Department’s highest award given to employees who distinguish themselves beyond their required duties to Mrs. Mary Brooks, Director of the Mint, at the 1972 Annual Awards Ceremony on September 8, 1972.

Mrs. Brooks received the Exceptional Service Award for her dynamic leadership and innovative policies and programs that have brought the U.S. Mint to new heights of public awareness and operational excellence.

Mrs. Brooks was particularly cited for her imaginative planning and guidance of the reorganization of the Mint. The citation further noted that: “She has stimulated a new and far-reaching public service program, inaugurated a Youth Education Program and miniature medal series. In addition, she established more effective quality control practices, instigated the preservation and restoration of the Old San Francisco Mint and other national treasures. She also laid the groundwork for a Mint computer system at San Francisco, California, as well as the building of a new Mint at Denver, Colorado. A nationwide offering and acceptance of the Eisenhower dollar program was launched under her leadership.

“These multiple and unprecedented accomplishments for the public good are a glowing tribute to Mrs. Brooks’ forceful and forward looking management of the U.S. Mint and are representative of outstanding government service.”