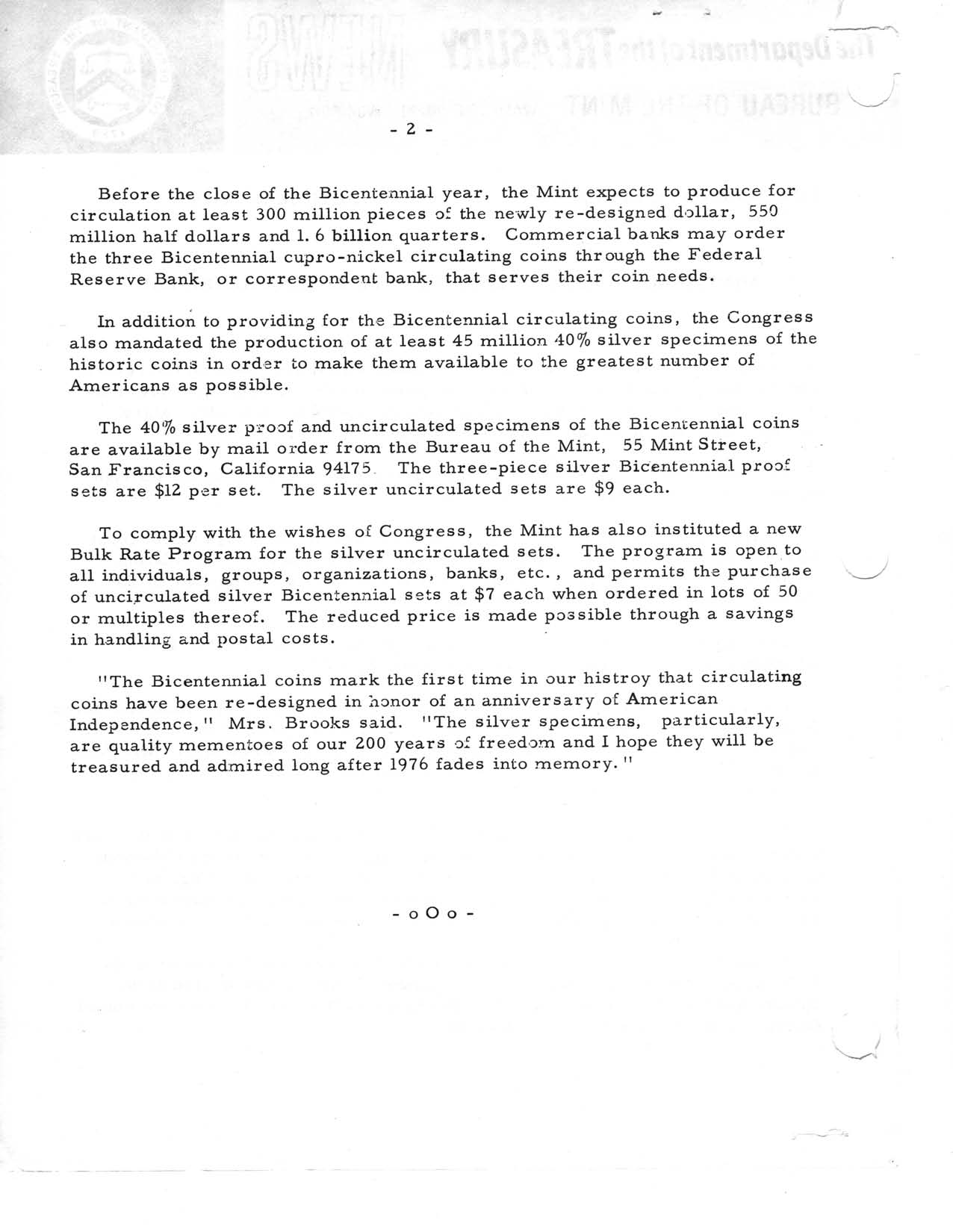 The Bicentennial dollar, picturing the Liberty Bell and moon on the reverse and the double date 1776-1976 beneath the portrait of President Eisenhower on the obverse, goes into circulation beginning October 13, 1975, Mrs. Mary Brooks, Director of the Mint, announced today.

The new dollar coins should begin appearing at commercial banks throughout the nation within the next week or two.

The clad dollar’s debut at commercial banks serviced through the Federal Reserve System completes the initial distributions of the three circulating coins authorized by Congress to carry designs and dates emblematic of the Bicentennial of the American Revolution.

The Bicentennial Kennedy half dollar was released last July 7 and was followed by the Washington quarter on August 18, 1975.

The three new designs were chosen in a national design competition sponsored by the Treasury Department. Independence Hall on the back of the half dollar was executed by Mr. Seth G. Huntington of Minneapolis, Minnesota. Mr. Jack L. Ahr of Arlington Heights, Illinois, designed the colonial drummer that appears on the quarter reverse.

The combination Liberty bell and moon on the back of the dollar is the work of Mr. Dennis R. Williams, a 22-year old sculpture student at the Columbus College of Art and Design in Columbus, Ohio. His winning drawing, and subsequent plaster coinage model, resulted from his sculpture instructor’s assignment of the competition’s coinage specifications as a design problem.

To inaugurate the release of the Bicentennial dollar, the President of the Federal Reserve Bank of Atlanta, Mr. Monroe Kimbrel, has invited Mrs. Brooks and Mr. Williams to Atlanta, Georgia, on October 13 for a ceremonial function in the Bank’s Monetary Museum.

Before the close of the Bicentennial year, the Mint expects to produce for circulation at least 300 million pieces of the newly re-designed dollar, 550 million half dollars and 1.6 billion quarters. Commercial banks may order the three Bicentennial cupro-nickel circulating coins through the Federal Reserve Bank, or correspondent bank, that serves their coin needs.

In addition to providing for the Bicentennial circulating coins, the Congress also mandated the production of at least 45 million 40% silver specimens of the historic coins in order to make them available to the greatest number of Americans as possible.

The 40% silver proof and uncirculated specimens of the Bicentennial coins are available by mail order from the Bureau of the Mint, 55 Mint Street, San Francisco, California 94175. The three-piece silver Bicentennial proof sets are $12 per set. The silver uncirculated sets are $9 each.

To comply with the wishes of Congress, the Mint has also instituted a new Bulk Rate Program for the silver uncirculated sets. The program is open to all individuals, groups, organizations, banks, etc., and permits the purchase of uncirculated silver Bicentennial sets at $7 each when ordered in lots of 50 or multiple thereof. The reduced price is made possible through a savings in handling and postal costs.

“The Bicentennial coins mark the first time in our histroy that circulating coins have been re-designed in honor of an anniversary of American Independence,” Mrs. Brooks said. “The silver specimens, particularly, are quality mementoes of our 200 years of freedom and I hope they will be treasured and admired long after 1976 fades into memory.”