The Mint at New Orleans 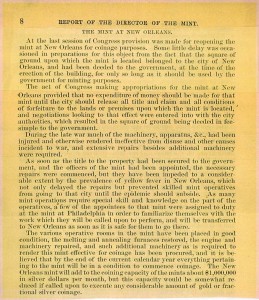 At the last session of Congress provision was made for reopening the mint at New Orleans for coinage purposes. Some little delay was occasioned in preparations for this object from the fact that the square of ground upon which the mint is located belonged to the city of New Orleans, and had been deeded to the government, at the time of the erection of the building, for only so long as it should be used by the government for minting purposes.

The act of Congress making appropriations for the mint at New Orleans provided that no expenditure of money should be made for that mint until the city should release all title and claim and all conditions for forfeiture to the lands or premises upon which the mint is located, and negotiations looking to that effect were entered into with the city authorities, which resulted in the square of ground being deeded in fee-simple to the government.

During the late war much of the machinery, apparatus, &c., had been injured and otherwise rendered ineffective from disuse and other causes incident to war, and extensive repairs besides additional machinery were required.

As soon as the title to the property had been secured to the government, and the officers of the mint had been appointed, the necessary repairs were commenced, but they have been impeded to a considerable extent by the prevalence of yellow fever in New Orleans, which not only delayed the repairs but prevented skilled mint operatives from going to that city until the epidemic should subside. As many mint operations require special skill and knowledge on the part of the operatives, a few of the appointees to that mint were assigned to duty at the mint at Philadelphia in order to familiarize themselves with the work which they will be called upon to perform, and will be transferred to New Orleans as soon as it is safe for them to go there.

The various operative rooms in the mint have been placed in good condition, the melting and annealing furnaces restored, the engine and machinery repaired, and such additional machinery as is required to render this mint effective for coinage has been procured, and it is believed that by the end of the current calendar year everything pertaining to the mint will be in a condition to commence coinage. The New Orleans mint will add to the coining capacity of the mints about $1,000,000 in silver dollars per month, but this capacity would be somewhat reduced if called upon to execute any considerable amount of gold or fractional silver coinage.