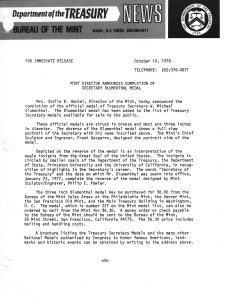 These official medals are struck in bronze and most are three inches in diameter. The obverse of the Blumenthal medals shows a full view portrait of the Secretary with his name inscribed above. The Mint’s Chief Sculptor and Engraver, Frank Gasparro, designed the portrait side of the medal.

Depicted on the reverse of the medal is an interpretation of the eagle insignia from the Great Seal of the United States. The insignia is circled by smaller seals of the Department of the Treasury, the Department of State, Princeton University and the University of California, in recognition of highlights in the Secretary’s career. The words “Secretary of the Treasury” and the date on which Mr. Blumenthal was sworn into office, January 23, 1977, complete the reverse of the medal designed by the Mint Sculptor/Engraver, Philip E. Fowler.

A brochure listing the Treasury Secretary Medals and many other National Medals authorized by Congress to honor famous Americans, landmarks and historic events can be obtained by writing to the address above.