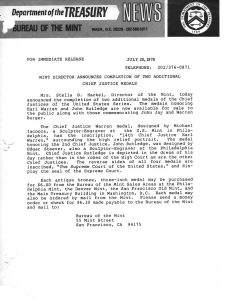 Mrs. Stella B. Hackel, Director of the Mint, today announced the completion of two additional medals of the Chief Justices of the United States Series. The medals honoring Earl Warren and John Rutledge are now available for sale to the public along with those commemorating John Jay and Warren Burger.

Each antique bronze, three-inch medal may be purchased for $6.00 from the Bureau of the Mint Sales Areas at the Philadelphia Mint, the Denver Mint, the San Francisco Old Mint, and the Main Treasury Building in Washington, D.C. Each medal may also be ordered by mail from the Mint. Please send a money order or check for $6.30 made payable to the Bureau of the Mint and mail to: