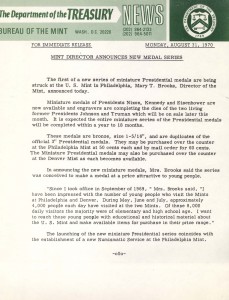 The first of a new series of miniature Presidential medals are being struck at the U.S. Mint in Philadelphia, Mary T. Brooks, Director of the Mint, announced today.

Miniature medals of President Nixon, Kennedy and Eisenhower are now available and engravers are completing the dies of the two living former Presidents Johnson and Truman which will be on sale later this month. It is expected the entire miniature series of the Presidential medals will be completed within a year to 18 months.

In announcing the new miniature medals, Mrs. Brooks said the series was conceived to make a medal at a price attractive to young people.

“Since I took office in September of 1969,” Mrs. Brooks said, “I have been impressed with the number of young people who visit the Mints at Philadelphia and Denver. During May, June and July, approximately 4,000 people each day have visited at the two mints. Of these 8,000 daily visitors the majority were of elementary and high school age. I want to reach these young people with educational and historical material about the U.S. Mint and make available items for purchase in their price range.”

The launching of the new miniature Presidential series coincides with the establishment of a new Numismatic Service at the Philadelphia Mint.