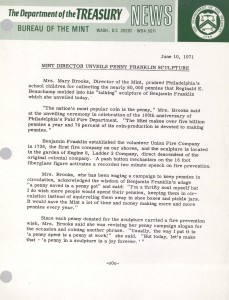 Mrs. Mary Brooks, Director of the Mint, praised Philadelphia’s school children for collecting the nearly 80,000 pennies that Reginald E. Beauchamp molded into his “talking” sculpture of Benjamin Franklin which she unveiled today.

“The nation’s most popular coin is the penny,” Mrs. Brooks said at the unveiling ceremony in celebration of the 100th anniversary of Philadelphia’s Paid Fire Department. “The Mint makes over five billion pennies a year and 76 percent of its coin production is devoted to making pennies.”

Benjamin Franklin established the volunteer Union Fire Company in 1736, the first fire company on our shores, and the sculpture is located in the garden of Engine 8, Ladder 2 Company, direct descendant of the original colonial company. A push button mechanism on the 16 foot fiberglass figure activates a recorded two minute speech on fire prevention.

Mrs. Brooks, who has been waging a campaign to keep pennies in circulation, acknowledged the wisdom of Benjamin Franklin’s adage “a penny saved is a penny got” and said: “I’m a thrifty soul myself but I do wish more people would spend their pennies, keeping them in circulation instead of squirreling them away in shoe boxes and pickle jars. It would save the Mint a lot of time and money making more and more pennies every year.”

Since each penny donated for the sculpture carried a fire prevention wish, Mrs. Brooks said she was revising her penny campaign slogan for the occasion and coining another phrase. “Usually, the way I put it is ‘a penny spent is a penny at work,’ ” she said. “But today, let’s make that – ‘a penny in a sculpture is a joy forever.’ “